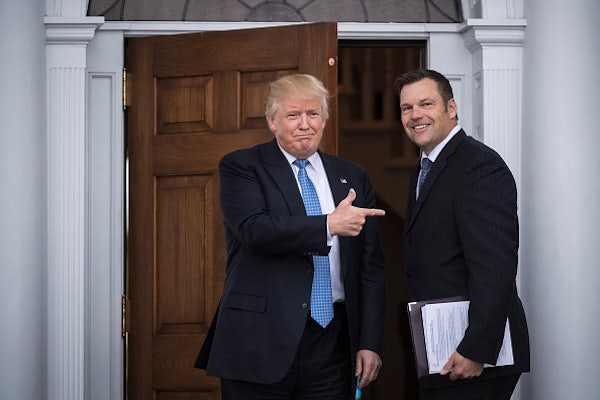 Trump’s “voter fraud” commission is being led by the GOP’s self-deportation architect.

Kris Kobach, the Kansas secretary of state, first came to national attention in 2012, when the Republican Party platform adopted the so-called “self-deportation” policy that Kobach invented. This refers to draconian laws—like the one Arizona, which Kobach wrote—that aim to make life so miserable for immigrants that they leave. Today, he’ll be appointed vice chair of Trump’s new Presidential Commission on Election Integrity, serving beneath Vice President Mike Pence.

Kobach’s appointment confirms that the election commission will be a project to enshrine voter suppression and intimidation tactics nationwide. “The Commission will review policies and practices that enhance or undermine the American people’s confidence in the integrity of Federal elections—including improper registrations, improper voting, fraudulent registrations, fraudulent voting, and voting suppression,” the White House has said of the new commission, which will be created by executive order today. This means that it is likely to perpetuate widely discredited right-wing myths of voter fraud and encourage policies meant to harass and intimidate voters who are black, brown, disabled, old, or just unlikely to vote Republican.

It’s work that will be familiar to Kobach. He disenfranchised thousands of Kansas voters with a law that requires people to show proof of citizenship when they register to vote, and has backed similar voter suppression initiatives nationwide. Like Trump, he’s into birth certificates. The move made him so popular with white nationalists that the Social Contract Press, which has been labeled a hate group by the Southern Poverty Law Center, made him the featured speaker at their annual conference in 2015.

It’s likely that Kobach and his new commission will work to provide Donald Trump with support for his wild fantasy that he in fact won the popular vote in the election last fall. If they are given leeway to enact their racist plans to curtail voting rights, that dream could come true in 2020.