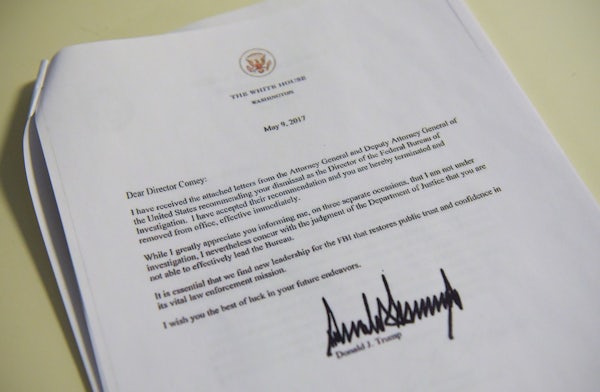 Donald Trump to James Comey: Beware! I recorded myself trying to obstruct justice.

Stipulating that President Trump’s insinuation that he recorded a conversation or conversations between himself and then-FBI Director James Comey is probably bullshit, let’s imagine it were true for a moment.

If there’s one thing we know about Comey it’s that, whatever his blindspots, his most prized asset is his claim to independence, or what we might call performative independence. His judgment might be flawed, or shaped by improper considerations, like the internal politics of the FBI, but he doesn’t make decisions that he can’t later account for under oath. And he’s not the kind of person who would get duped into surrendering that asset by a halfwit like Trump.

To the contrary, he is the kind of person who, faced with a compromising situation, starts taking notes and preparing for the moment when he’ll be able to vindicate his own behavior.

Almost 10 years ago to the day, Comey testified to the Senate Judiciary Committee about the Bush White House’s attempt to compromise the Justice Department’s independence, culminating in a dramatic confrontation at the hospital bedside of Attorney General John Ashcroft.

“You rushed to the hospital that evening, why?” asked Senator Chuck Schumer.

“I’ve actually thought quite a bit over the last three years about how I would answer that question if it was ever asked, because I assumed at some point I would have to testify about it,” Comey responded.

Trump seems to think Comey is the sort who wouldn’t assume his conversations with the president were being taped, or who wouldn’t start laying the groundwork for absolving himself the moment Trump asked him whether he was under investigation, or to pledge his loyalty.

It is overwhelmingly likely, then, that Comey’s version of events is the correct one, and Trump is either bluffing about the recording altogether, or the recording would confirm that Trump lied about what transpired.

But even if we assume that Comey abandoned his most prized asset and entered a corrupt, implicit bargain with Trump, where he affirmed Trump wasn’t under investigation, and thus got to keep his job—that outcome would be far, far worse for Trump, who would have recorded himself obstructing justice, than for Comey, whose reputation would be shattered, but who at the end of the day is now a private citizen with no job to lose. To that end, threatening to release possibly imaginary recordings of their conversation is tantamount to intimidating a witness.

If Trump’s threat isn’t idle, or a complete fabrication, then it’s a threat to ruin Comey’s suit with the blood and gore from shooting himself in the face.