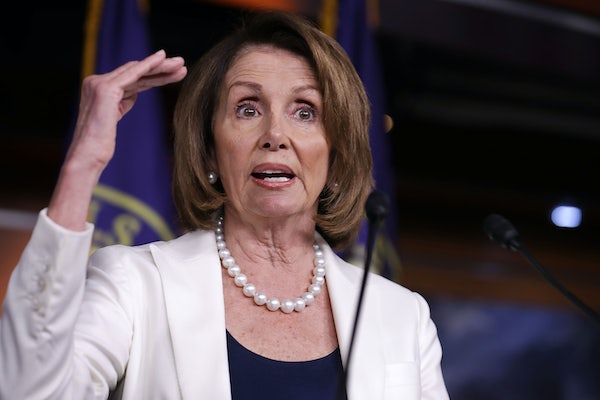 Nancy Pelosi is totally out of touch with the Democratic base.

With her televised town hall on CNN on Monday night, the House minority leader had a unique opportunity for Democrats: an hourlong primetime platform to excoriate President Donald Trump over his reported disclosure of highly classified intelligence information to the Russians, the news of which had broken just hours earlier. Yet instead of channeling the escalating alarm and outrage felt by Democrats across the country, Pelosi was only mildly critical of Trump, and even spoke of working together.

Pelosi did tell host Chris Cuomo it would be “very, very damaging” if Trump gave intelligence to the Russians, and said she constantly wonders, “What do the Russians have on Donald Trump?” But she was quick to stress “he can correct it” by not repeating the mistake. She also insisted that Democrats in Congress “have a responsibility to the American people to find common ground where we can.” She talked about working with Trump on infrastructure, family leave, and even tax reform. Referring to Republicans’ obstruction of President Barack Obama, she said, “we can’t follow that example.”

Pelosi further distanced herself from the Democratic base by dismissing talk of impeachment. “I don’t subscribe to that,” she told Cuomo. “Again, you’re talking about impeachment, you’re talking about what are the facts?... What are the rules he may have violated? If you don’t have that case, you’re just participating in more hearsay.” Serious people are already building serious cases for why Trump could be removed from office. Pelosi shouldn’t dismiss them out of hand.

Nor was this the first time Pelosi downplayed the concerns of the Democratic base at a CNN town hall. Back in January, she dismissed an earnest college student who asked about moving the party left on economic issues, telling him, “I have to say we’re capitalists. That’s just the way it is.” Then and now, she’s trivializing the concerns of a huge segment of her party, and Democrats are worse off for it.