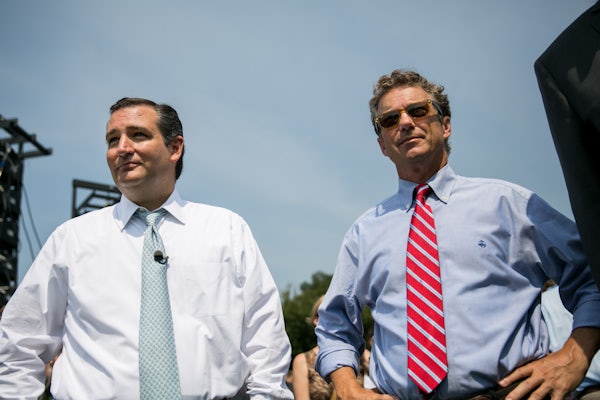 Ted Cruz and Rand Paul are plotting a dastardly scheme to gut Obamacare.

Paul has been one of the most consistent critics of the House’s attempts to repeal and replace Obamacare. While many of the AHCA’s critics have pointed out the dire consequences that would follow its passage—coverage would become more expensive, millions would lose their insurance, people would die—Paul has taken a different tack, instead arguing that Obamacare’s replacement is still too Obamacare-y.

Paul is not on the Senate’s “working committee” for repealing and replacing Obamacare, but he’s found an ally on the committee in Ted Cruz. No stranger to a fight, especially one that damages his party, the country, and himself, Cruz appears to be gearing up to reprise the role of the House’s Freedom Caucus in the Senate, pushing the bill as far as possible to the right.

To do this, Cruz and Paul have cooked up a novel solution, one that allies them with the White House—and further degrades rapidly degrading Senate norms. Cruz and Paul basically want to do a hostile takeover of the reconciliation process, which is what is allowing Republicans to avoid a Democratic filibuster. They aim to sideline the nonpartisan parliamentarian, who makes the calls on what kinds of legislation can be passed via reconciliation, and replace her with Vice President Pence.

According to Politico, Cruz and Paul “argue that it is up to whoever is presiding over the Senate at the time, which can be Vice President Mike Pence as president of the Senate. Under their argument, Pence could make the call about whether certain parts of Obamacare can be scrapped or whether new policy, such as allowing insurers to sell across states lines, can be enacted—and he would presumably be more aggressive than [Elizabeth] MacDonough.” This would effectively retire the Byrd rule, which prevents the Senate from using reconciliation to pass laws that are “extraneous” to the budget.

Paul and Cruz obviously mean business. They plan on doing whatever they can to push the Senate’s repeal and replace bill—which was widely assumed to be more moderate than the House’s—to the right. Senate Republicans don’t seem too excited about the news, however. “I don’t think it’s the best approach, and I think there would be resistance to that,” Senator Roger Wicker told Politico. “It’s tempting, but it’s also the proverbial slippery slope.” And there’s good reason for Republicans to be wary of this scheme. If it were to unfold, Democrats would turn around and use it to pass universal healthcare (and a host of other social programs) the next time they had 51 votes in the Senate.

Still, this is an era of slippery slopes in the Senate, something that Cruz and Paul both recognize, even if their colleagues don’t yet.