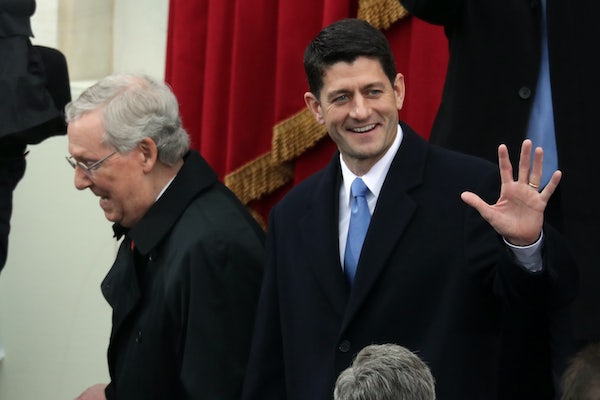 “No Drama” McConnell is turning the cynical subtext of the GOP’s devil’s bargain with Trump into text.

When House Speaker Paul Ryan abdicates all civic and constitutional duty in pursuit of massive tax cuts for affluent people, he at least does so with a measure of false modesty.

“I’m focusing on what’s in my control, and that is what is Congress doing to solve people’s problems,” Ryan said after President Donald Trump fired the FBI director who was investigating his campaign, and then blackmailed him on Twitter.

Dodge 1: I have no control over Trump.

Dodge 2: We have the people’s business to attend to.

The well attuned understand Ryan’s view of the “people’s problems” is that rich people pay too many taxes, thus allowing too many non-rich people to have health insurance. But at least he’s pretending there’s a compelling logic and higher principle to explain his odd insouciance about a president subverting rule of law.

Senate Majority Leader Mitch McConnell has no use for this kind of window-dressing. Here’s how he responded to the devastating news that Trump breached national security to impress Russian dignitaries in the Oval Office.

I think we could do with a little less drama from the White House on a lot of things so that we can focus on our agenda, which is deregulation, tax reform, repealing and replacing Obamacare.

Sharing highly compartmented, classified information with Russians is a theatrical distraction from the greater good of polluting streams, enabling predatory financial practices, cutting taxes, and taking people’s health care away. The idea that GOP congressional leaders will sacrifice almost any larger value for tax cuts is a bit of a running joke on political Twitter, but it is 100 percent true. It requires no exaggeration at all. Those who write it off as hyperbole must contend with McConnell, confronted with the possibly lethal consequences of his own dereliction, admitting that tax cuts are the forest, all other considerations are just trees.