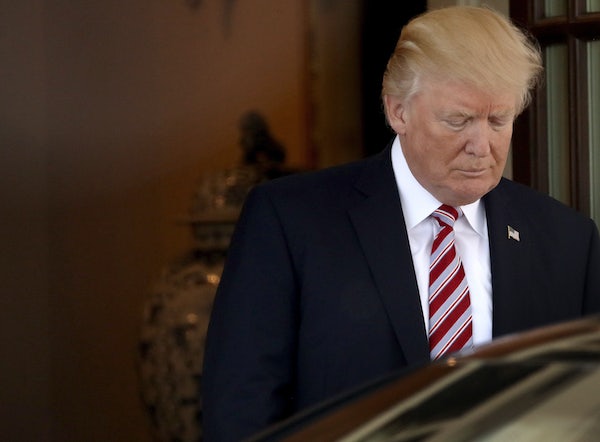 Is impeachment next for Donald Trump? Not so fast.

This week, The Washington Post revealed that President Trump discussed highly classified information with two Russian officials, jeopardizing America’s relationship with Israel and other key allies. The New York Times reported that FBI Director James Comey kept records of his conversations with Trump—and that the president, on at least one occasion, pressured him to drop the agency’s investigation into Michael Flynn’s contacts with Russia. This last report looks increasingly like the straw that will break the back of congressional Republicans. After spending months carrying water for Trump, a number of important Republicans in the House and Senate changed their tune. “We’ve seen this movie before,” Senator John McCain said last night. “It’s reaching Watergate size and scale.”

Asked what advice he has for Trump, McCain said, “The same thing that you advised Richard Nixon, which he didn’t do: Get it all out… It’s not going to be over until every aspect of it is thoroughly examined and the American people make a judgment. And the longer you delay, the longer it’s going to last.” Congressman Jason Chaffetz, meanwhile, requested Comey’s records of his interactions with the president. Meaningful congressional oversight may be here at last. And it’s only Wednesday.

All of this has Trump’s enemies buzzing. Cable news (of the non-Fox News variety) was all about impeachment last night. On Wednesday morning, Representative Al Green announced that he would call for Trump’s impeachment from the floor of the House. Many are thrilling to the prospect of removing Trump from office. After all, it certainly looks like Trump tried to obstruct justice. His opponents have been desperately searching for a silver bullet to finally stop Trump for good, and the Comey scandal is certainly the closest thing we’ve had since the Access Hollywood tape.

But remember, even after Trump was caught admitting that he liked to sexually abuse women, that didn’t stop wavering Republicans from ultimately returning to his defense—and there is no getting rid of Trump without the help of the GOP. The dam is starting to crack, but they’re being moved by necessity right now, and that necessity will start to fade again, until the next shoe drops. (At this rate, this will happen sometime around 5:30 PM today.) So far, Republicans are doing what they’ve always done: making symbolic, largely meaningless moves when things are tough, before forming a phalanx around this administration once again.