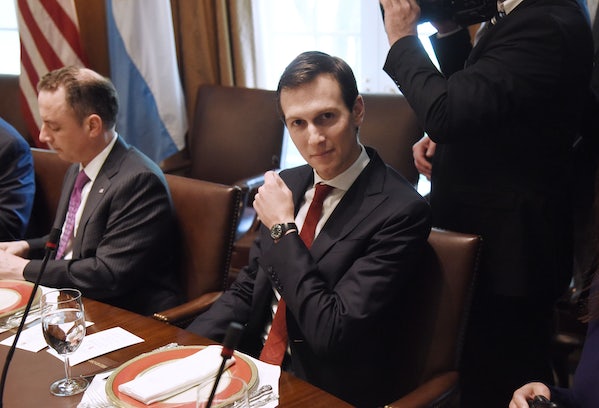 Is Jared Kushner’s time in the sun finally over?

For the first four months of the Trump administration, Kushner could do no wrong. He quickly amassed a remarkable portfolio of responsibilities, especially considering the fact that he has no prior government experience and seems to be almost singularly talentless. (His defining trait is his endless drive for vengeance for slights real and perceived.) Nevertheless, Kushner was tasked with improving relations with China and Mexico, solving the opioid crisis, and making peace between the Israelis and Palestinians, among other lesser responsibilities like criminal justice reform. He seemed to be the secretary of everything.

What was Kushner’s secret? He’s Donald Trump’s son-in-law. That not only created a bond between the two, but it also appears to have largely protected Kushner from the kind of anonymous White House leaks that have repeatedly hit people like Steve Bannon and Reince Priebus. Kushner used this to advantage—by many accounts, he was the source for many of the leaks that rocked his rivals. He was the de facto winner of the White House’s paunchier take on The Hunger Games.

But the shine, it seems, is finally off Kushner. He’s emerged as one of the scapegoats for the firing of James Comey.

At the very least, as Josh Marshall argues, this should finally kill the “Kushner the moderating influence” meme. The persistence of this meme has been very strange. (One possibility is that Kushner was protected from negative coverage because he was a good source.) In any case, all the available evidence suggests that Kushner and Ivanka used well-timed leaks to protect their own reputations—and not that they were Trump’s better angels, telling him to stop doing destructive and immoral things.

The other question is why Kushner would advocate for Comey’s firing. It’s possible that Kushner didn’t think this through and, like many in the White House, was simply fed up with Comey. But the idea that anyone other than Trump could have been this stupid—that anyone could have failed to anticipate the immense blowback that would follow—is still hard to comprehend.

One possibility is that Kushner, like Trump, saw a robust Russia investigation led by Comey as being a real threat—either because they thought it would show collusion or would uncover other illegal or unethical acts. In any case, Kushner is the golden boy no longer—and Donald Trump is more isolated than ever.