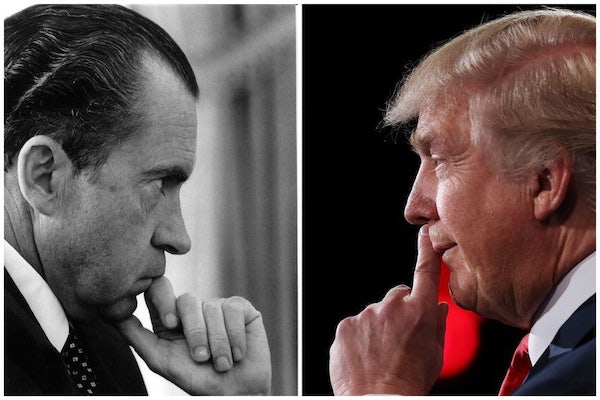 This Nixon-Trump comparison is so perfect it barely needs elaboration.

Late last month, fired National Security Adviser Michael Flynn — under investigation by federal prosecutors, with his lawyer seeking immunity for him to testify to Congress — met with a small group of loyalists at a restaurant in the northern Virginia suburbs.

Saddled with steep legal bills, Flynn wanted to reconnect with old friends and talk about potential future business opportunities. But one overriding question among those present were his views on the president who had fired him from his national security advisor post.

Flynn left little doubt about the answer.  Not only did he remain loyal to President Trump; he indicated that he and the president were still in communication. “I just got a message from the president to stay strong,” Flynn said after the meal was over, according to two sources who are close to Flynn and are familiar with the conversation, which took place on April 25.

It’s unclear whether this was the extent of their communication﻿s, and thus too early to tell whether Trump is creating legal jeopardy for himself—though as the Daily Beast reported eight days and several lifetimes ago, “White House lawyers have had to warn President Donald Trump repeatedly against reaching out to his fired National Security Adviser Michael Flynn.”

But to flesh out a historical analogy taken at random, on absolutely nobody’s mind, we can say that what Trump told Flynn is more or less exactly what Richard Nixon told his ousted chief of staff and Watergate conspirator H.R. Haldeman near the end of the line.

After Nixon reluctantly fired Haldeman, the two spoke by phone. There is, of course, a recording. “Keep the faith. Keep the faith,” Nixon said. “You’re going to win this sonofabitch.” Haldeman spent 18 months in prison.