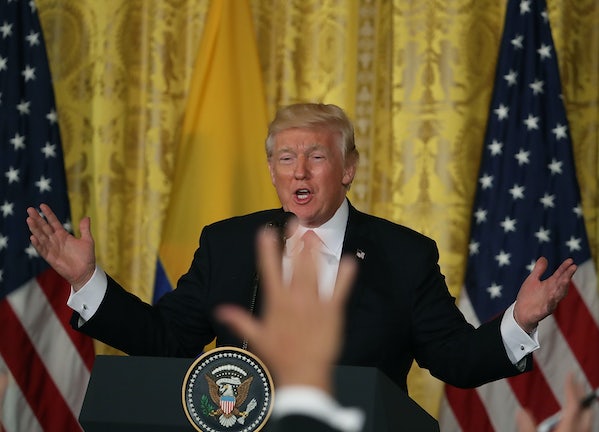 On Thursday, Trump answered questions from the press for the first time since Deputy Attorney General Rod Rosenstein announced that Robert Mueller would be overseeing the investigation into Russian meddling in the 2016 election. On Wednesday, Trump had issued a statement denying any collusion between his campaign and the Russians, saying that he looked “forward to this matter concluding quickly.” But on Thursday morning he blasted the investigation as a partisan “witch hunt,” and later told news anchors that he believes it “hurts our country terribly, because it shows we’re a divided, mixed-up, not-unified country.”

Trump did himself no favors at his joint press conference with Colombian President Juan Manuel Santos on Thursday afternoon. While much of the press conference was devoted to relations between the United States and Colombia, two moments stood out.

The first was when Trump was directly asked if he had pressured James Comey to drop the Russia investigation. “No,” Trump said. “Next question.”

This, as Jaffy notes, is setting up what may be a crucial conflict in the investigation as it moves forward. Because only Trump and Comey were in the room, it is essentially a he said-he said situation.

The second was when Trump once again used Rosenstein’s memo about Comey to justify the FBI director’s firing. “I also got a very very strong recommendation, as you know, from Deputy Attorney General Rosenstein,” Trump said. “Then [Comey] had the very poor performance on Wednesday [testifying before Congress]. That was a poor, poor performance. So poor, in fact, that I believe—and you’d have to ask him, but I believe—that’s why the deputy attorney wrote his very, very strong letter.”

The problem for Trump, however, is that shortly before the press conference, Rosenstein told members of Congress that he knew that Comey would be fired before he wrote the letter. Also, Trump himself had said that he planned to fire Comey no matter what Rosenstein recommended.

Someone is lying here, and it doesn’t seem to be Rosenstein.