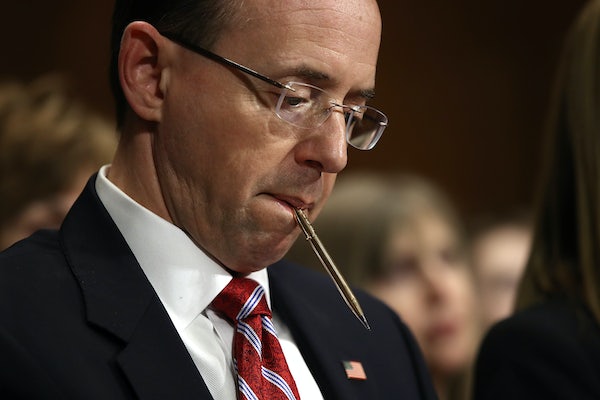 Did Rod Rosenstein let it slip that he may have been witness to a crime?

Though regularly drowned out by the clanging of major developments—I mean, holy crap!—one of the biggest guessing games in Washington right now revolves around Deputy Attorney General Rosenstein and his role in James Comey’s firing. Specifically: What the hell was he thinking?

I was struck by this exchange between reporters and Congressman Jim Himes, who sat in on a briefing Rosenstein provided to the full House of Representatives today. Himes, according to The Washington Post, “recalled the ‘dissonant moment’ when Rosenstein refused to say ‘who had asked him, if anyone had asked him to write his memorandum.’”

“He said, ‘That is [Special Counsel] Bob Mueller’s purview,’ and that was puzzling to a lot of us,” said Himes, a member of the House Intelligence Committee.

It strikes me as fairly revelatory that the question of who was involved in laying the pretext for firing Comey is now a matter for the special counsel to examine.

Rosenstein’s representations here read like a tacit admission that, in the wind-up to the firing, he may have been witness to a crime—the obstruction of justice, perhaps.

And if Rosenstein thinks that’s possible, it’s worth considering both the text of the memo itself, his selection of a Comey ally as a special counsel, and everything he’s told members of Congress in a new context. Remember, Rosenstein has told Congress that Trump made it clear he intended to fire Comey before Rosenstein wrote the memo, and that the memo was “not a statement of reasons to justify a for-cause termination.” Rosenstein is acting like a law enforcer confronted with a subject—who just happens to be his boss—trying to inculpate him in wrongdoing.