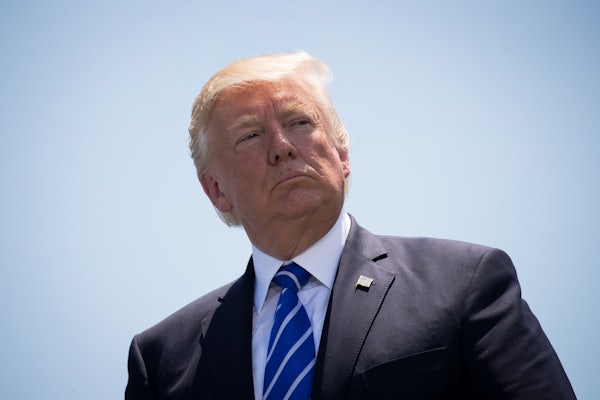 While the media was lavishing Trump with praise, he was preparing to shred the social safety net.

Trump’s first overseas trip has been going well, particularly by the abysmally low standards set for this president. There have been gaffes, to be sure—never great at reading prepared remarks, an exhausted Trump slurred many of his words in a speech about Islam and terrorism, accidentally saying the magic words “Islamic extremism” instead of “Islamist extremism” or “radical Islamic extremism.” But the reviews have nevertheless been good. This time it was Bob Schieffer who did the “he became president of the United States in that moment” bit, and Republicans are cautiously optimistic that, like many embattled presidents before him, Trump can use this overseas trip to gain momentum at home.

“Can this team and its leader learn from success?” a “key Republican” wrote in an email to Axios Presented By MomCorp. “If they can, the turn to presidential-level issues can create a sense of calm and normalcy which would begin the rebuilding process with Rs in Congress. It means leaving Mueller to the various lawyers and focusing on results for the moderate-income voters that Trump uniquely inspires. Trump’s presidency is about Trump, and that is vexing and tiresome to those struggling in a rapidly changing economy.”

But on Sunday we got a clue as to what these moderate-income voters can expect from the Trump administration’s first budget proposal. While Trump’s budget won’t include cuts to Medicare, there will be massive cuts to other programs that help moderate- and low-income voters. The budget slashes funding for Medicaid, CHIP (Children’s Health Insurance Program), food stamps, and disability insurance, while increasing work requirements for people receiving benefits. The people who will be targeted in these cuts are mostly the elderly, children, the poor, and the disabled.

Of course, the proposal assumes the passage of the AHCA—and the bill’s $800 billion in Medicaid cuts—and that’s far from assured. Some Republicans in the Senate are concerned about those cuts, and it’s possible that they won’t survive as the bill makes it out of the Senate and into conference committee. But this budget is another signal of what has become abundantly clear since Trump entered office: that his administration will cut the social safety net at every opportunity. Far from being focused on moderate-income voters, Trump is instead carrying water for a Republican elite that wants to transfer wealth up the income ladder.