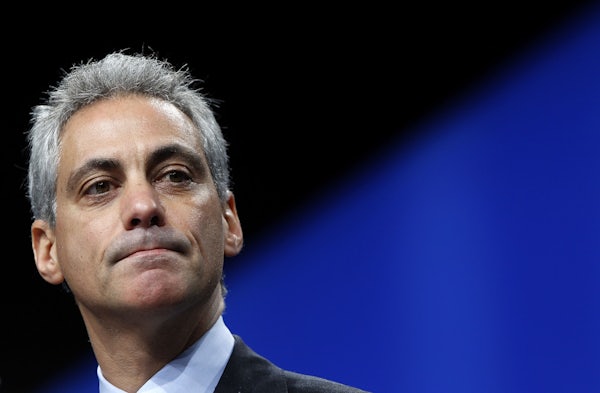 Why do Democrats care what Rahm Emanuel thinks?

When a party has lost the presidency and both chambers of Congress, the response, according to some Democrats, is to listen to one of the country’s most unpopular mayors. Politico reported yesterday that “three senior House Democrats” are about to travel to Chicago, where they will pay their respects to Emanuel. They are doing so because they reportedly believe that Emanuel’s 2006 tactics for delivering a House majority may succeed again:

“In 2006, there was a similar landscape, where Republican-controlled majorities in the House and Senate refused to do anything to hold George W. Bush accountable,” said Rep. Hakeem Jeffries of New York, one of the three Democrats planning the Chicago trip. “The 2006 blueprint will have to be updated and reloaded to reflect the environment of today, but there are some lessons that can be learned.”

This is a bad idea. As several analysts told Politico, the political landscape has changed. Emanuel’s chief strategy—recruiting centrists to tip Republican districts—is now at odds with the party’s energized progressive base. Activists are demanding movement on single-payer health care and the minimum wage, and they are not likely to tolerate a candidate that opposes abortion rights. Conservative Democrats are an increasingly risky investment for the party.

This doesn’t mean that the party is wrong to invest in conservative areas; it has to, if it wants to win elections. But the suburban territory Emanuel favors is also toughest for his party to conquer. As Eric Sasson reported for this magazine last year, Trump owes his victory largely to suburban whites, not working class whites. If the party runs moderates and conservatives in a bid to appeal to the suburbs, it also weakens its ability to adequately rebut Trumpism. The party has a real chance to promote an authentic progressive populism that offers an unmistakable contrast to the scam perpetuated by Donald Trump, and this is not in line with Emanuel’s 2006 strategy.

It’s worth remembering that Hillary Clinton deployed a similar strategy during her campaign, but Trump-skeptical conservatives didn’t vote Democratic in large enough numbers to win her the White House.

And then there’s Emanuel himself. He is infamous for waging war on Chicago’s public schools: He closed 50 schools in a day and laid off teachers while expanding charter schools. Teachers recently protested the imposition of unpaid furlough days. In February, ThinkProgress reported that he asked Attorney General Jeff Sessions for a “federal crackdown on gun violence” in the city. And as Katherine Kreuger notes at Fusion, he also tried to suppress police dashcam footage of the Laquan McDonald shooting. She adds:

Here’s a bold idea for 2018: rather than calling on Emanuel to help reheat the messaging and campaign strategies he co-opted from Republicans in the first place, they could try, I don’t know, championing policies that Americans actually like.