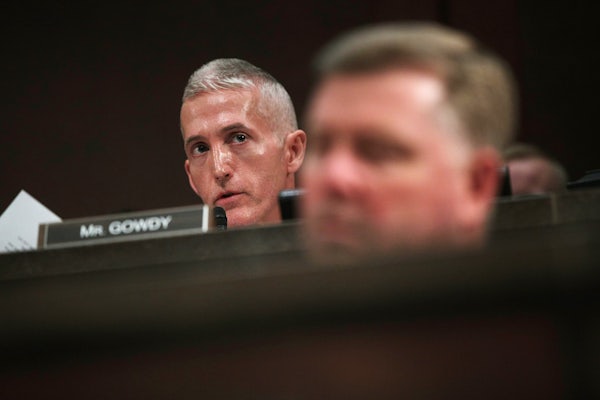 If you’re running interference for Donald Trump, you’ll eventually beclown yourself like Trey Gowdy just did.

Though the leaders of the House Permanent Select Committee on Intelligence are hoping to salvage their investigation of Russian election interference from their own compromised chairman, Devin Nunes, Republicans on that committee and others still view shielding the president from scrutiny as their primary purpose.

Consider this exchange between Congressman Trey Gowdy, who took over the investigation from Nunes, and former CIA Director John Brennan, who testified in open session on Tuesday.

It’s unclear to me what Gowdy’s been doing all this time, or why he thinks ousted FBI Director James Comey was accelerating his investigation when Trump fired him, or what he imagines Trump’s intention in trying to suborn leaders of the intelligence community was. Would there really be so much frenzied activity if investigators and intelligence professionals had nothing to glom on to? Was he not aware that the answers to his questions have already been provided to the committee in classified setting?

Gowdy genuinely seemed to believe he could bully Brennan into admitting there’s no evidence connecting Trump campaign officials to the Russian intelligence operatives who subverted the election; instead he got the most detailed account yet of why the FBI is investigating the Trump campaign in the first place. Brennan’s concern wasn’t just that Trump officials might intentionally abet a foreign subverion operation, but that Russian agents would entice these Americans unwittingly down what he called a “treasonous path.” Federal investigators are now probing whether either of those forms of conspiracy took place. This has been obvious to anyone paying even glancing attention to the story over the past weeks. Gowdy’s own-goal underscores the fact that members of Congress running protection for Trump are blinding themselves to so much in plain sight, they’re destined to trip over something at some point.