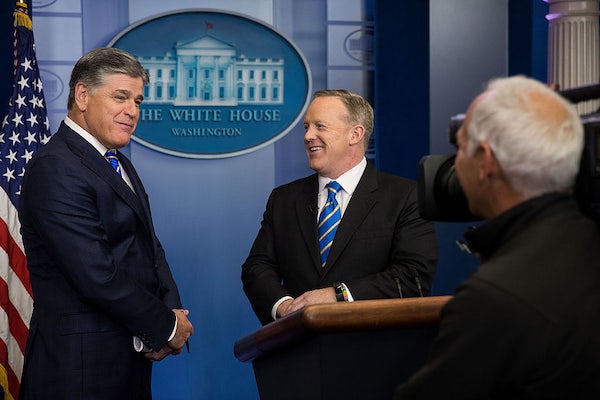 Last week, while nearly every media outlet was running story after story about the Trump administration’s hydra-headed Russia scandal, right-wing media was talking about Seth Rich, a DNC staffer who was murdered last summer. Rich’s mysterious death has yet to be solved, making it the source of many conspiracy theories. The story hit the mainstream when Rod Wheeler, a private investigator who was under contract with Rich’s family (and is also a Fox News contributor), informed a Washington, D.C.-based Fox affiliate that Rich had been in contact with Wikileaks before his death.

This story excites right-wing media because if Rich—and not the Russians—were responsible for the leaks that damaged Hillary Clinton’s campaign, then the cloud of suspicion and illegitimacy would be removed from Trump’s presidency. There are a lot of holes in this theory; it doesn’t explain the hacking of John Podesta’s emails, for one. But that’s really beside the point. This is a conspiracy theory, after all.

It was leading coverage on a number of right-wing outlets—Fox News, Drudge Report, Breitbart, InfoWars—even as it was quickly falling apart. It quickly became clear that Wheeler was not being paid by the Rich family. Wheeler told CNN’s Oliver Darcy that he didn’t actually have new information about the case and was instead relaying information given to him by the Fox reporter who interviewed him. Since Wheeler was the story’s only source, the story was bunk.

And yet, Fox did not retract it. The most egregious and highest-profile person pushing the story was Sean Hannity, who led with Seth Rich again and again while the White House (metaphorically) burned. Even after Wheeler basically recanted on air, Hannity continued to push the story, moving from Wheeler to Kim Dotcom, who claimed to have evidence proving that Rich was a Wikileaks source. Dotcom was an even worse source than Wheeler—he’s facing extradition for fraud and has offered no proof whatsoever. But that didn’t matter to Hannity, who was still tweeting and talking about Seth Rich on Tuesday, a full week after it was clear that the story was BS.

On Tuesday, Fox finally retracted the story. “The article was not initially subjected to the high degree of editorial scrutiny we require for all our reporting,” the network said in a statement. “Upon appropriate review, the article was found not to meet those standards and has since been removed.” But at roughly the same time that Fox retracted the story, Hannity was still pushing it.

There’s no sign yet that he’s going to back down, even though the story is a complete fabrication. Worse, the Rich family is begging him to stop.