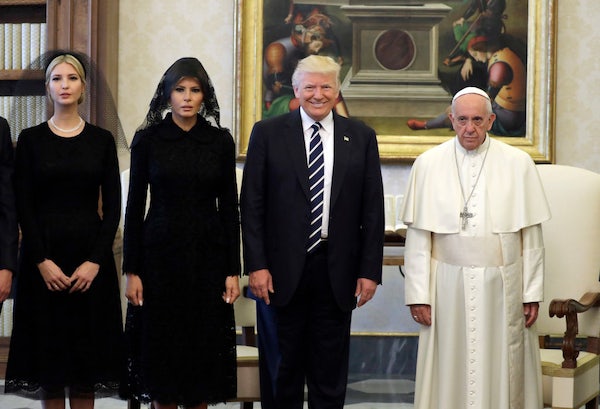 The Pope seems thrilled to meet the Trumps.

President Trump’s meeting with Pope Francis was destined to be at least a little awkward. Sure, Trump had lavished compliments on the pontiff in the past, tweeting that Francis was his dream Celebrity Apprentice contestant and that “the new Pope is a humble man, very much like me, which probably explains why I like him so much!” Pope Francis repaid the favor by tweeting about Trump two days after he announced that he was running for president.

But things quickly went south. Pope Francis subtweeted Trump after visiting the U.S.-Mexico border in 2016, saying, “A person who thinks only about building walls, wherever they may be, and not building bridges, is not Christian. This is not the gospel.” Trump, who was then (and still is) on a mission to alienate everyone in the world, hit back, calling the Pope’s comments “disgraceful” and saying that Francis would wish that Trump was president when ISIS invaded the Vatican.

Francis and Trump continued their quest to make the world’s most uncomfortable buddy movie on Wednesday, when they met for the first time. The passive aggression continued: Pope Francis presented Trump with Laudato Si, his encyclical on climate change. And, when Francis met Melania, he called Trump fat, which rules.

But nothing comes close to the picture at the top of this post, in which Pope Francis, Ivanka, and Melania look like they’re attending a funeral for Western democracy, while Trump—as is his custom—did not get the memo. After the meeting Trump said that it was the “honor of a lifetime,” but Pope Francis’s slumped shoulders say otherwise.