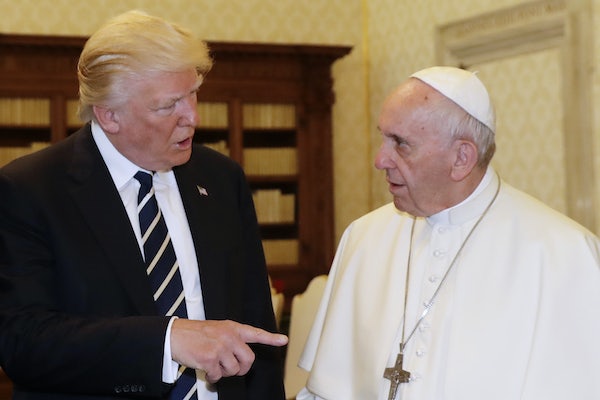 Let’s all pray the Pope gave Trump a CliffsNotes version of his climate encyclical.

On Wednesday, Pope Francis reportedly gifted the president a signed copy of Laudato Si, his 2015 encyclical on the environment, with the hopes that America’s tweet-storming, cable TV-obsessed commander-in-chief would actually read the 200-page document full of religion, science, and environmentalism. And no pictures!

But Trump did apparently promise to read the thing. This conjures up an improbable image: Trump settling into the leather swivel chair of the mini-Oval Office on Air Force One, brandishing a pen to underscore passages like this:

We are not God. The earth was here before us and it has been given to us. This allows us to respond to the charge that Judaeo-Christian thinking, on the basis of the Genesis account which grants man “dominion” over the earth,” has encouraged the unbridled exploitation of nature by painting him as domineering and destructive by nature. This is not a correct interpretation of the Bible as understood by the Church.

The climate is a common good, belonging to all and meant for all. At the global level, it is a complex system linked to many of the essential conditions for human life. A very solid scientific consensus indicates that we are presently witnessing a disturbing warming of the climatic system. In recent decades this warming has been accompanied by a constant rise in the sea level and, it would appear, by an increase of extreme weather events, even if a scientifically determinable cause cannot be assigned to each particular phenomenon. Humanity is called to recognize the need for changes of lifestyle, production and consumption, in order to combat this warming or at least the human causes which produce or aggravate it.

And I know Trump would certainly be super jazzed by this:

This sister now cries out to us because of the harm we have inflicted on her by our irresponsible use and abuse of the goods with which God has endowed her. We have come to see ourselves as her lords and masters, entitled to plunder her at will.

In the past, Trump has admitted he only scans “passages” and “chapters” of books, claiming he just doesn’t “have the time” to get through long written works. And that was before he was president—before he took on a job that he was surprised to find is “more work than in my previous life.” How will he have the time to read all this?

In a perfect world, the Pope would have converted the encyclical into a five-minute cable news TV segment. Instead, we can only hope that he realized Trump’s aversion to reading and adjusted. Maybe he took the advice given to other foreign leaders to praise Trump on his election win, and wrote little fun asides in the margins. “Jesus took up the biblical faith in God the Creator, emphasizing a fundamental truth: God is Father. (Note: Sort of like how Trump became father to the U.S. when he won the election by a landslide!! Amiright?)”

Let’s just hope Pope Francis had some sort of strategy to get Trump’s eyes on the document. The climate sort of depends on it.