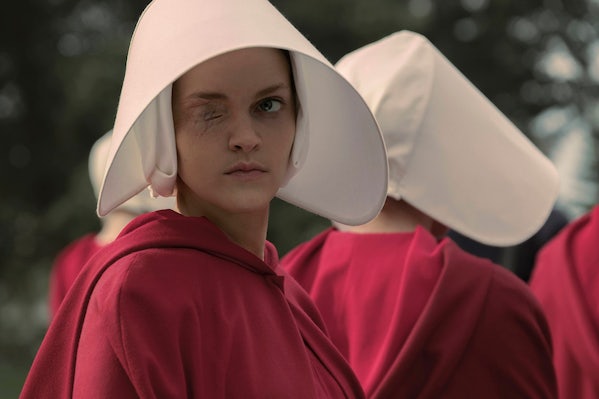 What Ross Douthat gets wrong about The Handmaid’s Tale.

Douthat has made good on a long-standing promise to write his own take on Margaret Atwood’s landmark 1985 novel, arguing that the book and the Hulu adaptation are not actually valuable guides in depicting the way we live now. Still, he urges conservative Christians to read the novel despite its anti-fundamentalist bent:

In this sense, conservative Christians should approach “The Handmaid’s Tale” as something more than just a hate-read for the same reason that socialists should read “1984” or even “Atlas Shrugged” and techno-optimists “Fahrenheit 451” or “Brave New World.” So long as you don’t accidentally decide that what you’re reading is not a warning but a blueprint, it’s always a useful exercise to think about how the ideas you treasure can be turned to wicked or inhuman ends.

That’s reasonable. So is his observation that lean-in feminism has “acquiesced” to surrogacy, which he terms “the class-bound commodification of childbearing.” I made the same point in my own essay on The Handmaid’s Tale.

After this, Douthat returns to familiar, flawed claims. Religious conservatives are actually kind of feminist, he says. Religious misogyny is on the way out. The belief that “a woman’s place is in the home is confined to intra-evangelical spats, with little broader influence,” he asserts, sans evidence. No, the real tyrant these days, in a flip of Atwood’s dystopian vision, is secular feminism:

Instead of a world where old-fashioned religious Puritans are trying to reinstate Leviticus, we have a world where the Puritans’ real cultural heirs, the moralistic post-Protestants of academe, are trying to impose a different, consent-based set of sexual regulations—while a laddish, bro-ish and, yes, Trump-ish bachelor culture laughs their prudery to scorn.

The real masters, he tells us, are the P.C. culture warriors on campus. The real victims are the religious conservatives who are everywhere in retreat. “A strange marriage of feminism and capitalism controls the commanding heights,” he writes, “and the commodification and regulation of sexuality advances under its auspices.”

This is an odd claim to make at a time when the entirety of elected federal government is controlled by the Republicans and the conservative men who lead them, some of whom, like Mike Pence, are fiercely religious. A woman’s right to have an abortion is under assault in states across the country. The president himself brags about sexual assault, and conservative voters, including Christians, don’t care.

Perhaps Douthat could learn from my own experience. The Christian college I refer to in my essay placed severe restrictions on human sexuality. I also had to file a Title IX complaint against it because it had no procedures for reporting sexual assault. Thus I learned that Gileadan approaches to sex are real and inflict significant harm. Is there any such real-life equivalent for the conservative Christians that Douthat sees as being prey to a feminist-capitalist alliance?

That is also the real message of The Handmaid’s Tale. Douthat just doesn’t get it.