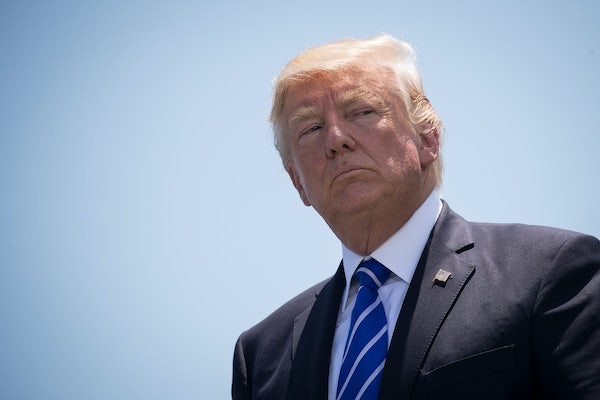 Blame the “Trump effect” for what happened to Ben Jacobs.

On Wednesday night, Greg Gianforte, the Republican candidate in a special election for Montana’s lone House seat, was arrested and charged with a misdemeanor assault after he allegedly “body-slammed” Jacobs, a reporter for The Guardian, in response to Jacobs questioning Gianforte about the American Health Care Act. A Fox News crew that witnessed the event claimed that Gianforte “grabbed Jacobs by the neck with both hands,” then “slammed him into the ground” and “began punching” him. In an audio recording of the altercation, Gianforte can be heard saying, “I’m sick and tired of you guys!”

Gianforte’s team released a black-is-white version of the events, claiming, “After asking Jacobs to lower the recorder, Jacobs declined. Greg then attempted to grab the phone that was pushed in his face. Jacobs grabbed Greg’s wrist, and spun away from Greg, pushing them both to the ground. It’s unfortunate that this aggressive behavior from a liberal journalist created this scene at our campaign volunteer BBQ.” Gianforte’s version is contradicted by Jacobs’s own account, the Fox News account, and the audio recording, which does not support the claim that Gianforte asked Jacobs to lower his recording device.

This is not the first time we have seen Republicans behaving badly in recent weeks. Earlier this week, the New Republic reported a story about Saily Avelenda, the founder of a grassroots group that is trying to get New Jersey Representative Rodney Frelinghuysen to hold a town hall to answer questions from constituents. In response, Frelinghuysen sent a letter to a board member at the bank where Avelenda worked, claiming that the conservative agenda was under attack by “organized forces,” and that “one of the ringleaders works at your bank.” Avelenda ultimately felt compelled to resign from the bank.

The two incidents are connected by what Meredith McGehee of the Campaign Legal Center called the “Trump effect.” As Abby Rabinowitz reported:

Reassuringly, McGehee told me that Frelinghuysen’s actions were unusual. Less reassuringly, she read them as part of a larger “Trump effect,” created by a president who every day overturns the norms of political behavior. She likened it to the body politic moving from a smooth stream into the rapids. “I’d say Frelinghuysen got caught up,” said McGehee.

Of course, these two incidents could be isolated, born of unique circumstances that have little relation to the broader Trumpian context in which they occurred. But they both are characteristic of the way Trump has approached skepticism and dissent: through bullying, delegitimization, and outrage. Most of all, they betray a total disrespect for the organs of civil society and basic democratic institutions like a free press. As Michael Calderone notes at HuffPost, journalists across the country have reported being threatened, arrested, and manhandled in the last three weeks, part of a pattern that stretches back to Trump’s rallies in 2016.

Needless to say, this is all a terrible omen for what could happen over the next four years. McGehee says we’re moving into the rapids. And after the flood comes the fire.