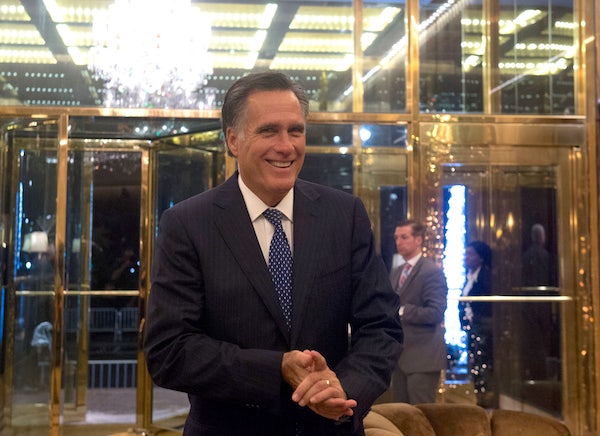 Senator Orrin Hatch, 83, is leaning toward retiring, and 2012 Republican presidential nominee Mitt Romney, 70, is “very likely” to run for his seat in 2018. Utah Policy reported on Thursday:

Romney and Hatch are close, and earlier this year Hatch told the media that he would consider not running again if someone “outstanding” were to seek his seat.

Asked who could be such an “outstanding” candidate, Hatch mentioned Romney, the former governor of Massachusetts and the man who led the Salt Lake City 2002 Winter Olympics out of scandal and into a very successful Games.

Romney would be a natural fit for this race. He’s one of the most well-known Mormons in the country. He went to Brigham Young University in Provo. He has lived in Utah periodically throughout his life, and he’s a resident now. He would bring the respect and gravitas of having been a governor and run for the White House; he’s now seen as a statesman figure of the GOP establishment. He’s also independently wealthy and has extensive fundraising experience. If Hatch and other establishment leaders got behind him, Romney could overwhelm whoever else decided to compete in the GOP primary. (Utah is a solidly Republican state, and Hatch always won lopsided victories over Democrats in the general election.)

There’s even a chance Senator Mitt Romney could be good for the country. On the one hand, as Lucia Graves argued in the New Republic last month, Romney’s record looks rosier mostly because President Donald Trump is so bad. Romney would be conservative senator, no friend to the progressive cause. But he was among the most outspoken GOP critics of Trump during the campaign, and in the Senate he’d have the freedom and stature to take him on. “Utah is about equally as anti-Trump as it is pro-Romney,” Aaron Blake wrote last month in The Washington Post. “Trump did win the state, but that victory owed entirely to the state’s Republican lean. Polls there showed Trump’s favorable rating as low as 19 percent and his unfavorable rating as high as 71 percent, largely thanks to Mormons disliking him.” Blake’s headline is as true today as the day it ran: “The idea of Senator Mitt Romney should scare Trump.”