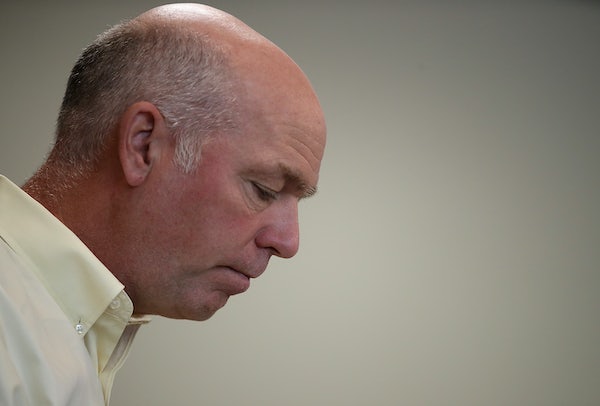 Everyone now knows that Gianforte, who may win his race for Montana’s House seat against Democrat Rob Quist today, is violent. Fewer seem to realize that he also has ties to white nationalism, but that information has become newly relevant after his attack on Guardian reporter Ben Jacobs.

As the HuffPost’s Dana Liebelson reported last September, during Gianforte’s failed bid to become Montana’s governor, he was once connected to a disturbing offshoot of the classical Christian school movement:

Greg Gianforte, the wealthy technology entrepreneur who’s challenging incumbent Steve Bullock (D) for the Montana governor’s seat, served with [Douglas] Wilson on the board of the Association of Classical and Christian Schools, which the pastor co-founded. (Wilson is an ex officio member of the board, which means he doesn’t vote.) Both men spoke at the group’s conferences in 2014 and 2015. Gianforte praised Wilson at the 2014 conference.

Wilson does not openly identify as a neo-Confederate, but he’s close: With co-author Steven Wilkins, Wilson authored a book that characterized the institution of slavery as “a relationship based upon mutual affection and confidence.” He said of the ante-bellum South, “There has never been a multiracial society which has existed with such mutual intimacy and harmony in the history of the world.”

As Mark Potok noted for the Southern Poverty Law Center in 2004, the work of Confederate Army chaplain R.L. Dabney has long influenced Wilson, and the ACCS website lists Dabney’s On Secular Education as a resource for would-be classical Christian educators. Wilson isn’t Dabney’s only fan. He’s also something of a folk hero to kinists, an ideology the Anti-Defamation League defines as a Christian doctrine centered on the idea that “the social order for man is based on ‘tribal and ethnic’ (by which they mean racial) ties.” Put another way: They are Christian segregationists.

So why do Wilson and kinists embrace Dabney? Dabney is also the author of A Defense of Virginia and Through Her, of the South. Some choice quotes:

A representative for ACCS confirmed to the New Republic that Gianforte is no longer on its board. And though there’s no evidence that Gianforte is a kinist, his old connection to ACCS is interesting in light of his decision to donate to a white nationalist’s campaign for the state legislature. According to Rewire News, Gianforte donated twice to the campaign of Taylor Rose, a Montana Republican with ties to Youth for Western Civilization and the Council for Conservative Citizens. Rewire also reports that Gianforte has donated to politicians affiliated with the Oathkeeper movement.

Liebelson’s reporting should have tanked Gianforte’s political career. Instead, he was able to mount another campaign to represent Montana in the House of Representatives. It now seems that nothing, not even his assault on a reporter, can dissuade the Republican Party from supporting him.