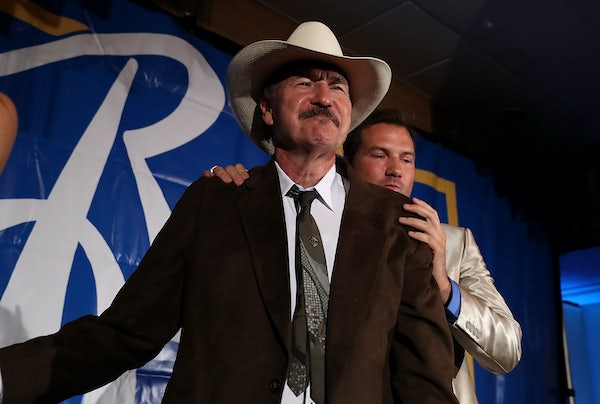 Reporter-beating Republican Greg Gianforte will represent Montana in the House of Representatives. It’s not totally surprising that Gianforte’s violence didn’t cost him the race; a substantial number of early votes had been cast before he was charged with assaulting Guardian reporter Ben Jacobs. And thanks to Trump, the Republican base is primed to reward violence on journalists.

But some are already blaming his opponent, Democrat Rob Quist, for the outcome:

Quist was an unusual candidate, but eerily suited for a state like Montana. He is known to voters thanks to his popular folk music band and his family ranch. That, and his cowboy hat, may be enough to qualify him as “quirky” to people who do not live in rural places, but it probably did not bother the people of Montana. Nor is his loss likely due to his left-wing platform. There were a number of other factors at work, and money is perhaps the most influential one. Gianforte is a billionaire, and outside groups flooded his campaign with extra cash. Per Roll Call:

If Democrats want to win races, they have to spend money. They didn’t do that in Montana, and they shouldn’t be surprised their candidate lost his race. Last night’s outcome has less to do with Quist’s progressive platform and more to do with deeper failures in the national party’s electoral strategy. Those failures existed long before Quist and his banjo hit the campaign trail.

There are additional contributing factors the party could not control. A local NBC affiliate refused to air audio of Gianforte’s violent assault on a reporter; according to HuffPost, it’s owned by the Sinclair Broadcast Group, a conservative-leaning conglomerate. And as BuzzFeed’s Anne Helen Peterson reported yesterday, Montana has a problem with voter suppression:

Montana is a complicated state, politically; it is not deep red in the way that most southern states are deep red. Quist may have been “quirky,” but quirkiness did not cost him a congressional seat. There are other, more important lessons for Democrats to learn from his race, and from his loss.