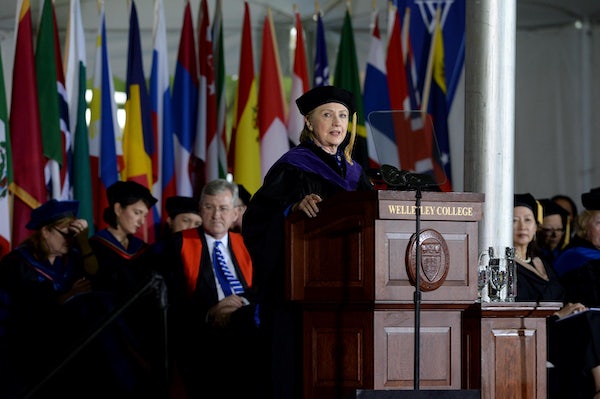 Republicans are delighted that Hillary Clinton is back.

Responding to Clinton’s commencement speech at Wellesley, Republican National Committee Chair Ronna McDaniel issued a statement saying, “Today’s speech was a stark reminder of why Hillary Clinton lost in 2016. Instead of lashing out with the same partisan talking points, Hillary Clinton would be wise to look inward, talk about why she lost, and expand the dwindling base of Democratic Party supporters—we won’t hold our breaths though.”

The subtext of the statement, along with the flare-up of anti-Clinton articles in places like the Daily Caller, is that the right is absolutely tickled pink at the prospect of Clinton being the face of the resistance to Trump. And why shouldn’t they be? Trump won in large part because Clinton is so hated by the Republican base. “Crooked Hillary” was the perfect opponent to rally Republicans behind Trump.

In fact, that’s what’s been missing from Trump’s first months in office—a recognizable foil. He has tried to turn the media into a public enemy, but it can’t compare to a bona fide political opponent. In this respect, however valuable Clinton’s message might be in terms of content, she may be the person who is least able to deliver it effectively.