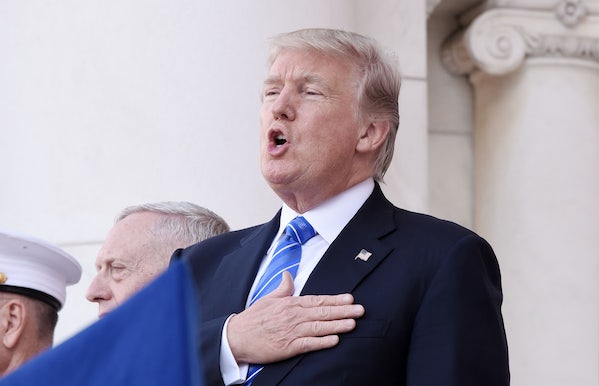 If Trump has no financial ties to Russia, then why not release his tax returns?

In Trump’s now-infamous interview with NBC News’s Lester Holt, the one where he admitted that he fired James Comey because of the Russia investigation, the president also insisted that he has no financial ties to Russia. “I have had dealings over the years where I sold a house to a very wealthy Russian many years ago,” Trump said. “I had the Miss Universe pageant—which I owned for quite a while—I had it in Moscow a long time ago. But other than that, I have nothing to do with Russia. No loans, no nothing.”

Trump’s financial connection to Russia is highly relevant to the investigation into the suspicious ties between his campaign and Russian intelligence. On Monday evening, CNN reported that Russian intelligence officials had reportedly discussed “derogatory” material they had about Trump and other campaign officials:

Russian government officials discussed having potentially “derogatory” information about then-presidential candidate Donald Trump and some of his top aides in conversations intercepted by U.S. intelligence during the 2016 election, according to two former intelligence officials and a congressional source.

One source described the information as financial in nature and said the discussion centered on whether the Russians had leverage over Trump’s inner circle. The source said the intercepted communications suggested to U.S. intelligence that Russians believed “they had the ability to influence the administration through the derogatory information.”

This is obviously troubling, even if the report itself isn’t exactly authoritative. U.S. officials told CNN that it “could have been exaggerated or even made up,” part of Russia’s larger disinformation campaign that has sought to sow distrust in American institutions and leaders.

Nevertheless, among all of the other crazy stuff that’s happened over the last four months, the fact that Donald Trump, easily the most financially entangled person to ever run for president, has not released his tax returns has often played second (or third, or eleventh, or 37th) fiddle to other scandals, many of them pertaining to Russia itself. But Trump’s tax returns remain vital to understanding the precise nature of his financial ties to Russia.

The White House characteristically called CNN’s report fake news: “This is yet another round of false and unverified claims made by anonymous sources to smear the president. The reality is, a review of the president’s income from the last ten years showed he had virtually no financial ties at all. There appears to be no limit to which the president’s political opponents will go to perpetuate this false narrative, including illegally leaking classified material. All this does is play into the hands of our adversaries and put our country at risk.”

But if there really is no merit to this story then the Trump administration has no reason not to release his tax returns.