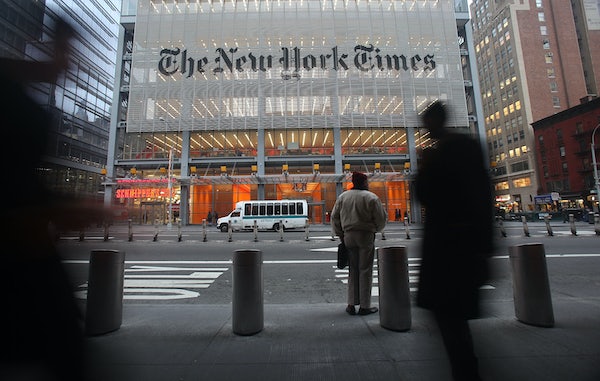 The Times is ending the role of public editor, HuffPost reported today. It’s an ignominious end for Liz Spayd, whose controversial tenure has spurred widespread—and deserved—criticism.

Since taking the position in 2016, she’s inadvertently boosted an alt-right harassment campaign against one of the paper’s reporters, defended the use of false equivalence, and dismissed public concerns about the paper’s decision to hire Bret Stephens. “It’s hard to tease apart objections to Stephens’s work from objections to hiring any conservative at all,” she complained in an April column. This egregiously mischaracterizes the Stephens outrage, which stemmed largely from his specific variant of conservative thought. He is a climate change skeptic. He’s written of “the disease of the Arab mind,” dismissed campus rape statistics, and claimed that Black Lives Matter contains “thuggish elements.” The problem with Stephens is that despite his professed hostility to Donald Trump, he is not politically far removed from an administration that denies scientific fact and is already eroding civil rights. You wouldn’t know that from anything Spayd ever published on the subject.

“My job is not to win any popularity contests,” she told The Atlantic’s Adrienne LaFrance, and though that’s technically true it’s a neat way of avoiding accountability for her missteps. Her errors can be mostly attributed to two factors: a blinkered commitment to “both sides” journalism, and the over-valuing of reader complaints, many of which are less than useful. These are fatal failings for a public editor, and Slate’s Will Oremus in April correctly wrote that she is “exactly the wrong sort of journalist for the job.”

But her incompetence probably isn’t the reason the Times has decided to eliminate her role. The paper also announced today that it is offering buyouts to editors in an attempt to increase the ratio of reporters to editors. It’s a mistake, however, to include the position of public editor in this effort. Spayd’s predecessor, Margaret Sullivan, won plaudits for holding the Times’s feet to the fire on an array of issues, from false balance to anonymous sourcing to the eroding wall between the paper’s editorial and business departments. Most of all, she seemed to chip away at the Times’s penchant for dismissing even legitimate criticism.

The public editor is set to be replaced by a new “Reader Center,” which publisher Arthur Sulzberger Jr. says will allow the newsroom as a whole to respond more effectively to criticisms coming from outside the Times. Whether these critics will have as much impact as as an independent ombudsman who has been empowered to hound reporters and editors remains to be seen.