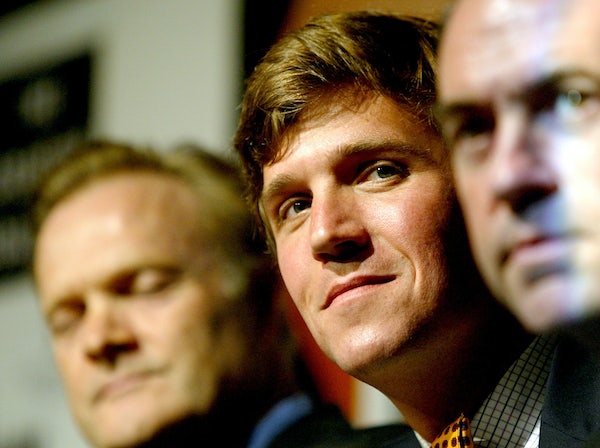 The Daily Caller is just fine with publishing white supremacists.

Jason Kessler’s sympathetic report on protests to preserve a Robert E. Lee memorial in Charlottesville, Virginia, ran in The Daily Caller on May 14. The article had one major problem: Its author is a white nationalist. As A.C. Thompson reports in ProPublica, Kessler was a participant in the protest, giving a talk where he “praised groups such as the American Vanguard, an organization that espouses the eradication of the country’s democratic structure of governance. He hailed Matthew Heimbach, who views himself as a warrior against Jews and people of color, and Sam Dickson, a denier of the Nazi Holocaust who has been involved in racist activities since the 1970s.”

In response to ProPublica’s reporting, The Daily Caller added a note to the article: “The author notified The Daily Caller after publication that he spoke at a luncheon May 14 on behalf of an effort to preserve the monument.”

More troublingly, in its larger response to the controversy, The Daily Caller is taking the position that the original article was fine and the only problem is the conflict of interest—not Kessler’s manifest support for racist politics. As Paul Connor, executive editor of The Daily Caller, told ProPublica, “The story is factually accurate and plainly states what happened at the event. But in light of his activism on the issue, we have mutually agreed to suspend our freelance relationship with him.”

Connor was unwilling to criticize Kessler’s praise of racists, saying, “We pay writers for journalism, not their opinions.” But even if Kessler hadn’t participated in the protest, his commitment to white supremacy, evident in his longstanding activism, obviously has bearing on his journalism.