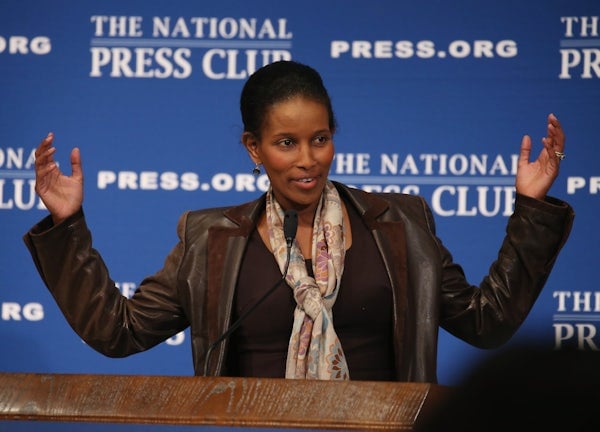 The Senate is about to hear from two of the worst possible “experts” on Islam.

Ayaan Hirsi Ali and Asra Nomani, who typically refer to themselves as proponents of Muslim “reform,” will testify at a Senate Homeland Security and Governmental Affairs subcommittee hearing on “Ideology and Terror: Understanding the Tools, Tactics, and Techniques of Violent Extremism.” This apparently only refers to extremism of the Muslim variety—one wonders when we will get a hearing on the alt-right—and the presence of Hirsi Ali and Nomani sends a disturbing message about the motivations of the committee’s Republican members.

Let’s start with Hirsi Ali. In 2016, the Southern Poverty Law Center included her on a list of anti-Muslim extremists for her statements about Islam. Islam, she has claimed, is a “destructive, nihilistic cult of death.” She has urged its defeat by the West and asserted that it is “not interested in peace.” Once a Dutch MP for the conservative People’s Party for Freedom and Democracy, she briefly lost her Dutch citizenship for lying on her asylum application. She is now a fellow at the conservative Hoover Institution.

Enmeshed in the conservative think tank world, Hirsi Ali has successfully branded herself an expert on Islamic extremism. She has repeatedly claimed that Muslims are responsible for “70 percent” of all violence in armed conflicts around the world. There’s no evidence that this is true, as Max Blumenthal confirmed with foreign policy experts in 2015. In May, she blamed the rise of anti-Semitism in Europe squarely on Islam—never mind that the continent’s surging far-right fringe has quite a bit to do with it too. Her views on Islam are largely indistinguishable from that of Donald Trump and his administration.

She has this in common with her fellow witness. Asra Nomani is an outspoken supporter of Donald Trump. “As a liberal Muslim who has experienced, first-hand, Islamic extremism in this world, I have been opposed to the decision by President Obama and the Democratic Party to tap dance around the ‘Islam’ in Islamic State,” she complained in an editorial for The Washington Post. She claimed that Trump’s Islamophobia had been “exaggerated and demonized by the governments of Qatar and Saudi Arabia, their media channels, such as Al Jazeera, and their proxies in the West.” Nomani also backed Trump’s Muslim ban, saying on Fox News that America needs “extreme solutions.”

Hirsi Ali and Nomani aren’t reliable witnesses, and their extreme views ought to disqualify them from any platform dependent on expertise. On Wednesday, they’ll simply tell Senate Republicans exactly what they want to hear about Islam. It won’t be factual, but for Republicans, it won’t matter.