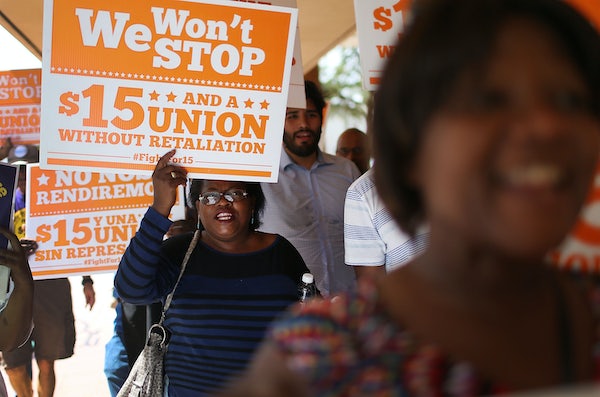 Has Seattle’s minimum wage hike backfired? Not so fast.

On Monday, researchers at the University of Washington released a much-anticipated study that looked at the effects of the first stages of Seattle’s $15 minimum wage increase, which has been phasing in since 2015. The paper found that Seattle’s second wage bump to $13 reduced hours worked in low-wage jobs by 9 percent. These findings sharply diverge from what has been previously reported—only last week, a study by researchers at Berkeley found that Seattle’s minimum wage increase had only a negligible impact on jobs.

The UW study, which is partly commissioned by the city of Seattle, is sure to garner a lot of attention since the authors had exclusive access to detailed state data on hours and earnings of workers. Republicans are already using the study to excoriate “liberal policies”:

But researchers at the left-leaning think tank the Economic Policy Institute have found some major issues with the UW paper. First off, because of data limitations, the study excludes businesses with multiple locations, such as fast-food chains—that means that 40 percent of Seattle’s workforce is not included at all. Ben Zipperer, an economist at EPI, says that it is “a serious data problem” that “potentially biases their estimates toward finding job loss even when there may have been none.” Take, for example, if employment had shifted in this time period from single establishment firms to multi-location firms (a likely scenario)—the UW study would only count these changes as job losses, without including the job gains at multi-location firms.

EPI researchers also criticize the UW paper on another major count: that low-wage job loss might be a reflection of Seattle’s booming labor market, which has shifted employment from low-paying to high-paying jobs. To separate out the two, researchers usually look at a control group, or a city that is experiencing a similar job boom but did not increase its minimum wage. However, Zipperer claims that the study’s control group—which splices together other areas in Washington state—is questionable, since “their numbers makes it look like Seattle is growing much faster around the time of the minimum wage increases than their control group.” To be an accurate control, the two places need to be growing the same way, so the effects of the minimum wage increase can be isolated.

Most previous research shows limited-to-no job loss due to increases in minimum wages across the country. According to Zipperer, the UW study raises red flags because it is “well beyond the upper end of what has been previously published,” even for consistent minimum wage critics.