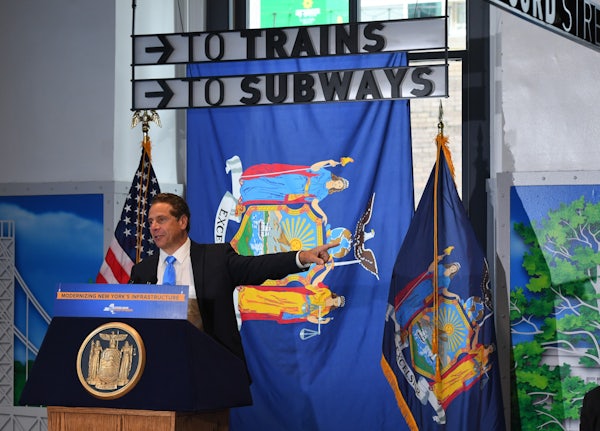 Over the past few months, the decrepit New York City subway system has gotten more media attention as the horror stories have piled up. Earlier this week, a train derailed in Manhattan, injuring at least three dozen people and trapping hundreds more who had to walk through tunnels to escape. Last month, the F train completely failed, trapping passengers for an hour without air-conditioning, light, or air flow, resulting in a viral video of people desperately clutching at the doors of the subway car, begging to be let out.

The New York Times published a graphic that displayed what all New Yorkers already knew in their bones to be true: Over the past decade, every single subway line has gotten worse. The Times piece pegs this problem to overcrowding, but the underlying issue is lack of funding to accommodate for the growth in ridership.

Earlier this month, in a completely meaningless PR move, Cuomo requested “control” of the MTA so that he could fix it, an attempt to obscure the fact that he already controls the MTA. The only upside to this move was that it resulted in this amazing Gothamist headline: “Cuomo, Who Controls The MTA, After Denying He Controls It And Asking To Control It: ‘Who Knows’ Who Controls The MTA.”

In response to the growing pressure, Cuomo on Thursday declared a state of emergency for the system, committing $1 billion to the MTA Capital Plan and ordering the MTA chairman to provide a reorganization plan for the agency within 30 days. But if past is prologue, New Yorkers will want to see results before commending Cuomo for taking action to “fix” the subway. Cuomo also complained about the fact that subway riders “tweet nasty things about me all day,” which, true.

In his announcement, Cuomo stated that the “current state of decline is wholly unacceptable.” Naturally, Cuomo did not acknowledge that he has been perfectly content with this state of decline for quite some time.