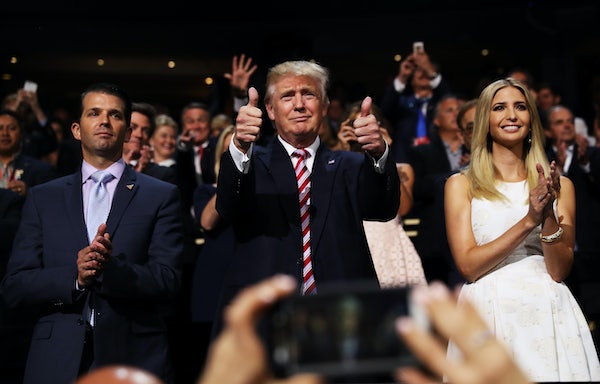 Donald Trump gets his morning briefing from Fox & Friends.

Before becoming president, Trump famously decided to not participate in daily intelligence briefings, saying, “I’m, like, a smart person. I don’t have to be told the same thing in the same words every single day for the next eight years.” Instead Trump has gotten the information he needs every morning from cable television, particularly Fox & Friends.

On Monday morning, Trump retweeted Fox & Friends four times and Sean Hannity once; he sent two tweets defending his daughter Ivanka Trump for keeping his seat warm during the G-20 conference in Hamburg; one tweet about the need to repeal and replace Obamacare; and another accusing James Comey of illegally leaking classified information. The last one is the best place to start.

Trump technically tweeted about the former FBI director three times, since two of the Fox & Friends retweets were about a Hill report that alleged that more than half of Comey’s memos, some of which he shared with a friend, contained classified information.

Trump, as usual, takes a tantalizing possibility and amplifies it to its most damning possible conclusion: that Comey knowingly leaked classified information to the press. There are two problems here. The first is that the Hill report merely raises the possibility that Comey may have leaked classified information to the press. And the second is that this is the president, who could surely know more about this issue if he wished to.

Trump’s tweet about his daughter also has a lot going on:

This is the Trump presidency in a nutshell: He does something inappropriate; people correctly label what he did as being inappropriate; Trump then reacts to that reaction, usually by bringing the Clintons into it. In this case, Trump’s response is doubly weird, because he basically concedes that his critics are correct: He’s grooming Ivanka for high office and had her take his seat at the G-20 for that reason.