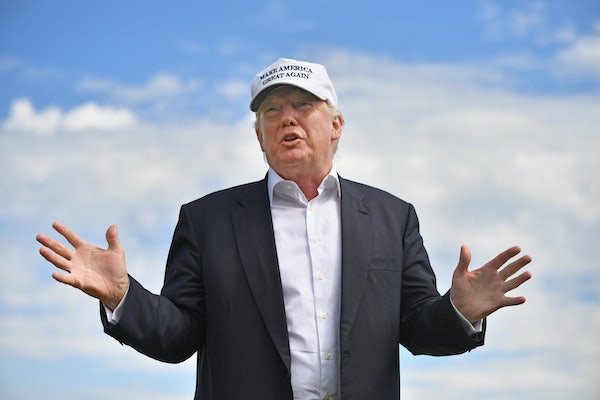 On Wednesday, after tweeting about a bunch of things he saw while watching TV for several hours that morning, Trump tweeted this:

A guilty conscience needs no accuser. Trump has a lot of time for watching television, as every morning he spends in the White House (or Mar-a-Lago or anywhere else with a cable and/or satellite hookup) will testify. With zero major legislative accomplishments under his belt, the first six months of Trump’s administration have been as defined by cable news as anything else. Trump watches cable news, then tweets about it. Cable news then covers the tweets. Then Trump tweets about cable news covering the tweets. The circle of life.

But Trump apparently doesn’t just tweet about Morning Joe and Fox & Friends. He forces visitors to listen to him as he acts out exchanges on cable television:

This is nuts. Cable news was not designed for anyone to pay close attention to it and morning shows are even more vacuous and inane—their sole purpose is to drown out the existential dread as you get ready for another interminable and meaningless day at work. But Trump is so obsessed with cable news that foreign diplomats are recommending that representatives from their governments appear on television in order to sway the president. He apparently balked at firing Sean Spicer because he “gets great ratings.” And now, he’s acting out Fox & Friends for guests. Let’s just hope he stops the cosplaying before he starts a Joe Scarbrough cover band.