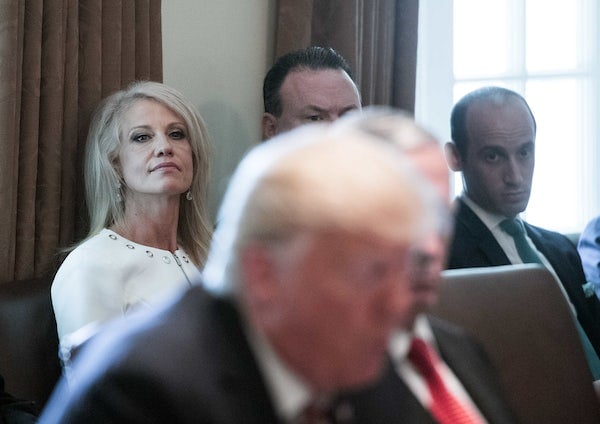 Kellyanne Conway: Our conspiracy with Russia was so inept, we can’t be held responsible for it.

Speaking on Fox & Friends on Friday, President Donald Trump’s counselor complained, “The goal posts have been moved. We were promised systemic, hard evidence of systemic, sustained, furtive collusion that not only interfered with our election process but indeed dictated the electoral outcome.” This is a classic case of projection, since Conway herself is moving the goalposts. After all, who promised “hard evidence of systemic, sustained, furtive collusion”?

While Donald Trump Jr.’s emails, and the meetings between Trump campaign officials and Russian operatives, are indeed “hard evidence” of “furtive collusion”—just not proof of “systemic, sustained” collusion. So is Conway suggesting that chaotic, occasional, and badly disguised collusion between the Trump campaign and the Russian government is okay?