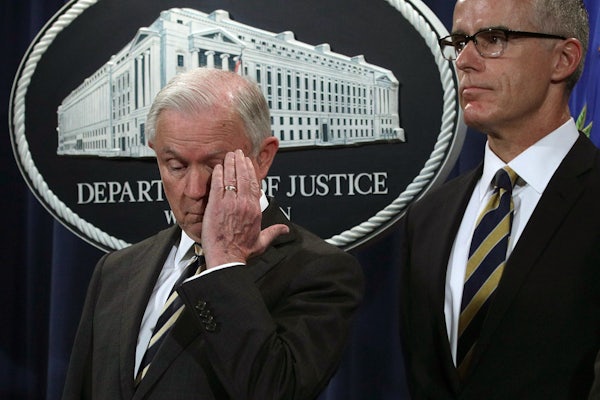 On Monday, the attorney general announced that he would be introducing a policy directive within the week that would seek to expand the scope of civil asset forfeiture. The announcement is the latest in the DOJ’s efforts to dismantle Obama-era justice policy, but Sessions’s overhaul of asset forfeiture may be his most egregious overstepping of civil liberties yet.

Civil asset forfeiture is the controversial practice that allows for the private property of suspected criminals to be permanently confiscated by the state or federal government. Seized assets can then be sold, with most states permitting law enforcement to pocket 90 percent or more of the resulting profit. Defenders of asset forfeiture claim that the policy ensures “no criminal … keep[s] the proceeds of their crime,” a line Sessions echoed in his official statement. However, civil asset forfeiture allows police forces to seize property from citizens before any conviction is made, and in many cases, the standard of proof required for a forfeiture is laughably flimsy.

In 31 states, police only need to suspect a 50 percent probability that an asset is “connected to a crime” for a forfeiture to take place; in Massachusetts, the level of evidence required to permanently seize private property is only “probable cause.” Considering that police only need “probable cause” to make arrests, a simple arrest in Massachusetts could be grounds for police to auction off the belongings of an innocent person. This presents an obvious conflict of interest for cash-strapped police departments, and horror stories abound of families being stripped of their homes simply for being suspects in a crime.

Perhaps most damningly for Sessions, however, civil forfeiture also represents a fundamental rejection of conservative ideological pillars such as small government and the just protection of private property.

In fact, in an unlikely display of cross-partisan solidarity, many of America’s staunchest conservative voices have gone on the record to criticize Sessions’s stance on civil forfeiture. George Will penned a fiery column against the practice for National Review late last year, while Mike Lee—who has been named in studies as the most conservative member of the Senate—has blasted civil forfeiture as a process where “due process is often ignored.” Sessions’s latest policy directive is thus another reminder that Trumpism is a threat not only to progressivism, but also to certain old-fashioned conservative values that were once thought to hold sway over the GOP.