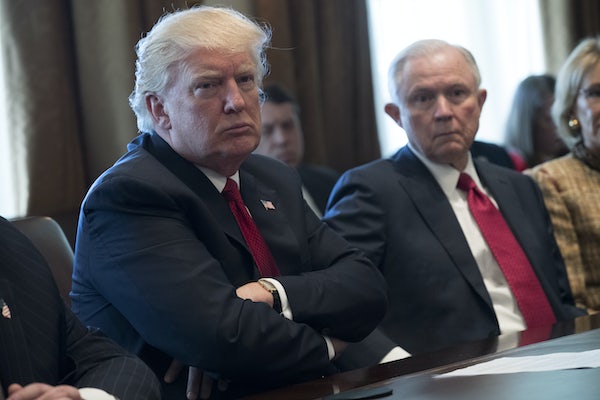 In Donald Trump’s world there are no laws, only loyalists and traitors.

In a 50-minute New York Times interview conducted on Wednesday that can only be described as [garbled], Trump went off on nearly every high-ranking official that has been part of the Russia scandal. Most notably, he berated his own attorney general, Jeff Sessions, for recusing himself from the investigation back in March:

BAKER: Was that a mistake?

TRUMP: Well, Sessions should have never recused himself, and if he was going to recuse himself, he should have told me before he took the job, and I would have picked somebody else.

HABERMAN: He gave you no heads up at all, in any sense?

TRUMP: Zero. So Jeff Sessions takes the job, gets into the job, recuses himself. I then have — which, frankly, I think is very unfair to the president. How do you take a job and then recuse yourself? If he would have recused himself before the job, I would have said, “Thanks, Jeff, but I can’t, you know, I’m not going to take you.” It’s extremely unfair, and that’s a mild word, to the president. So he recuses himself. I then end up with a second man, who’s a deputy.

TRUMP: Who is he? And Jeff hardly knew. He’s from Baltimore.

It’s important to note that, when it comes to rolling back civil rights and other policies, Sessions is pretty much Trump’s dream Keebler elf. But all Trump can focus on is Sessions’s recusal, which paved the way for a special counsel investigation.

Then there’s Trump’s “new phone, who dis” disdain for his Deputy Attorney General Rod Rosenstein. Trump told the Times, “Then I said, ‘Who’s your deputy?’ So his deputy he hardly knew, and that’s Rosenstein, Rod Rosenstein, who is from Baltimore. There are very few Republicans in Baltimore, if any. So, he’s from Baltimore.” (For the record, Rosenstein is from Pennsylvania, but served as a U.S. attorney in Baltimore.) Rosenstein was the one who appointed Robert Mueller as special counsel, which is why Trump is trying to smear him by implying that he might be a secret Democrat with ulterior motives.

Unsurprisingly, Trump is also still slandering James Comey, accusing him of “illegally” leaking to the press.

As for Mueller, Trump suggested that if the special investigator were to look into his personal finances unrelated to Russia, that would be a step too far—a “violation,” in his words. The Times pressed Trump as to whether or not that would cause him to fire Mueller:

HABERMAN: Would you fire Mueller if he went outside of certain parameters of what his charge is? [crosstalk]

SCHMIDT: What would you do?

TRUMP: I can’t, I can’t answer that question because I don’t think it’s going to happen.

Crosstalk aside, the warning to Mueller came through loud and clear.