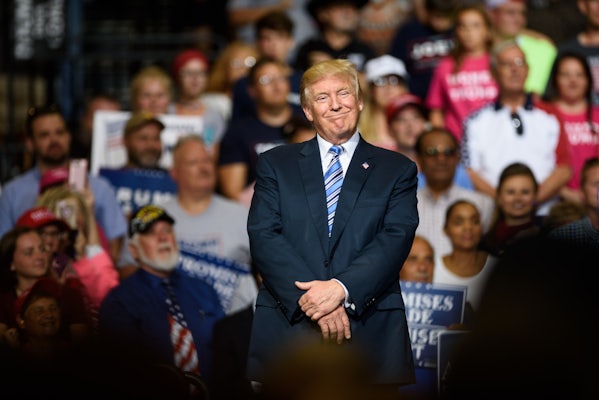 Everyone in Congress is really stressed about the pee tape.

In January, BuzzFeed published an unverified dossier alleging possible collusion between Russia and Donald Trump that was compiled by ex-British intelligence officer Christopher Steele (coincidentally, also the name of an ex-British intelligence officer in my unfinished romance novel). The most salacious allegation, of course, was that Russian authorities had obtained sweet, sweet kompromat on Trump in the form of a video that showed Trump, who stayed in a hotel room in Moscow that the Obamas had previously stayed in, “defiling the bed where they had slept by employing a number of prostitutes to perform a ‘golden showers’ (urination) show in front of him.” For the record, there is no evidence (thus far) that the pee tape actually exists.

But, thankfully, what is dead may never die. On Friday, Politico reported that two Republican House Intelligence Committee staffers went to London earlier in the summer to leave calling cards for Steele. According to Politico, Republicans did not tell Democrats on the House committee, the Senate Intelligence Committee, or Robert Mueller about the trip. Apparently, everyone is paranoid about what may or may not be happening around the dossier:

The London trip has also angered Democrats in both chambers of Congress, who were not consulted by their colleagues before the investigators knocked on Steele’s door. Democrats fear House investigators are more interested in discrediting the dossier than trying to substantiate its allegations.

Some Republicans, meanwhile, distrust their Democratic colleagues—suspecting them of maintaining a back channel to Steele to discuss the allegations in the dossier, something the Republicans say would be inappropriate.

Since everyone and their mother is trying to get to the bottom of the dossier, it might be worthwhile to look at everything we know about the pee tape.

First off, immediately after BuzzFeed published the dossier, Trump tweeted the following:

Back then, this was only the second time in history that Trump had tweeted the term “Fake News.” The dossier’s publication clearly touched a nerve.

Since then, rumors of the pee tape have persisted throughout Trump’s Russia scandal. A key part of the dossier—that a Russian diplomat was actually a spy under diplomatic cover—was confirmed by the BBC, which, as the BBC writes, “adds weight to Steele’s other claims.” Then, in June, James Comey released his memos, which detail that Trump brought up the dossier multiple times to him. Trump said that he was considering asking Comey to “investigate the alleged incident to prove it didn’t happen.” He also asserted that he “had not been involved with hookers in Russia.” Does this sound like someone who is not worried about the existence of a pee tape?

Then, during Comey’s testimony before Congress, Senator Richard Burr directly asked Comey about the dossier: “At the time of your departure from the FBI, was the FBI able to confirm any criminal allegations contained in the Steele document?” Comey responded with a non-denial: “I don’t think that’s a question I can answer in an open setting because it goes into the details of the investigation.” Sounds like someone who doesn’t want to talk in an open setting about the possible existence of a pee tape.

Then, in an extensive interview with The New York Times in July, Trump brought up the dossier again, making the claim the Comey had used the dossier as leverage to try to keep his job. Later in the month, Kellyanne Conway went on Fox News to say that the dossier is a “fancy French word for la loade du junk.”

Much of the dossier may very well be a loade du junk. But everyone wants to get to the bottom of this junk. And until they do, the pee tape lives on.