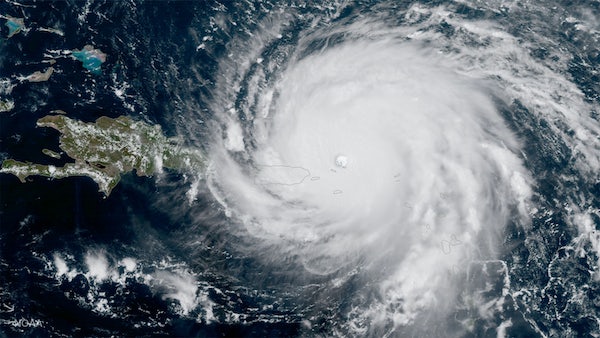 “We should be naming hurricanes after Exxon and Chevron, not Harvey and Irma.”

That’s the environmental group 350.org’s takeaway from a peer-reviewed study published today in the journal Climatic Change, which seeks to hold individual fossil fuel corporations accountable for causing global warming. The study’s authors say they not only figured out how much pollution corporations have emitted, but how much their emissions contributed to rising oceans and global warming. Specifically, the study asserts that the 90 largest carbon producers—including BP, Chevron, ConocoPhillips, and ExxonMobil—have cumulatively caused up to 50 percent of the increase in global mean surface temperature since 1880, and up to 32 percent of global sea level rise. Investor-owned companies like BP, Chevron, ConocoPhillips, and ExxonMobil have caused 16 percent of the global average temperature increases and 11 percent of the global sea level rise, the study says.

It’s obvious why 350 would use these findings to argue for renaming devastating hurricanes after fossil fuel companies. The study “demonstrates, strictly speaking, causal responsibility” for the worst impacts of sea level rise and temperature increases, Oxford University political science professor Henry Shue wrote in accompanying commentary for the study. And while it’s unclear whether climate change causes more hurricanes, it’s clear that a warmer atmosphere and ocean can cause more destructive storms. As InsideClimate recently explained, “Warmer air retains more water vapor, which can result in dramatic rainfall like what happened during Hurricane Harvey.” Warmer oceans also feed storms, helping them strengthen. Right now, with Irma, we’re experiencing the strongest Atlantic hurricane in recorded history. We can’t say that’s because of climate change, but we can say that climate change made that much more likely to happen. “These aren’t just natural disasters, they’re fossil fueled events, and it’s time the industry was held accountable,” 350’s senior communication director Jamie Henn said via email.

350 is also likely promoting the study because the group supports making fossil fuel companies pay for the staggering economic impacts of climate change. Multiple lawsuits, similar to the (successful) ones against the tobacco industry, have been filed against fossil fuel companies over their failure to warn the public that their products could cause global warming. Plaintiffs and environmental groups hope this new science, directly linking those corporations’ emissions to climate change impacts, will help their cause. With a potentially $125 billion storm about to hit Florida, and federal disaster coffers quickly running out of money, the science couldn’t have come at a more dire time.