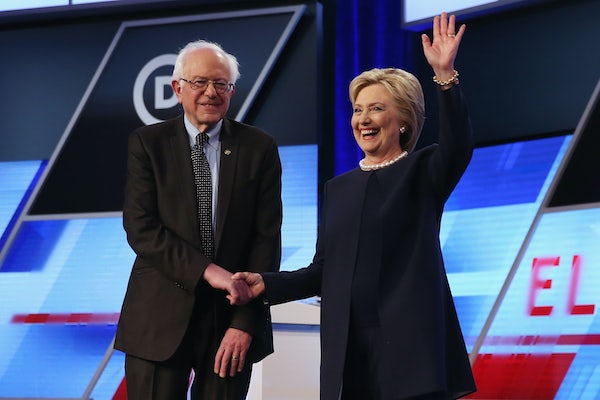 Hillary Clinton says Bernie Sanders has been nothing but a “spoiler.”

Today is Clinton’s biggest day in the public spotlight since November 8, as she releases her much-anticipated book What Happened, a tell-all of her experiences during the election. This morning, Clinton went on NPR’s Morning Edition to talk about the book, and she is slated to appear at a book signing in New York City later in the day.

The book has been under embargo, but excerpts that trickled out over the past week indicated that Clinton blames Sanders for promising “ponies,” while she was left to act as the pragmatic and realistic candidate (although by all accounts, the book focuses even more on James Comey, Donald Trump, and Russian interference in the election). In her Morning Edition interview, Clinton opened up about how she viewed Sanders’s role in the campaign:

I find this criticism from Sanders supporters to be so off base. He’s not even a Democrat. That’s not a slam on him. He says it himself. He didn’t support Democrats. He’s not supporting Democrats now. I know a lot of Democrats. I’ve been working on behalf of Democrats, to be elected, to be re-elected, for decades. And so yes, I was familiar to broad parts of the electorate, and I’m proud of that. And I did well across the country. I won by four million votes. That’s a landslide. I won, really, by March and April. But he just kept going, and he and his followers’ attacks on me kept getting more and more personal, despite him asking me not to attack him personally. And, you know, I really regret that. But now he’s got a chance to prove that he’s something other than a spoiler. And that is to help other Democrats. And I don’t know if he will or not, but I’m hoping he will.

First off, it’s hard to avoid the glaring hypocrisy, given that Clinton herself refused to drop out of the primary in 2008 even after it was clear that there was no way for her to win the nomination. (Barack Obama won the general anyway, evidence that a long primary slog isn’t death for a candidate.) But the main contention here is even more egregious—that Sanders has yet to “prove that he’s something other than a spoiler.” There were certainly flaws in Sanders’s campaign and missteps that he has made since the election. But after she won the nomination, Sanders endorsed Clinton and embarked on a vigorous campaign tour to get her elected.

Furthermore, since November, Sanders has done a unity tour with DNC chair Tom Perez and sponsored a Medicare for All bill that is slated to come out this week, which is co-sponsored by a growing number of Democratic senators. He has campaigned for Democrats in special elections. To sum up all of these actions as the work of a “spoiler” is pure fiction.

Clinton’s book and her return to the public spotlight were billed as a rare opportunity for the candidate—who went through one of the craziest and most sexist elections in this country’s history—to reflect openly and thoughtfully about What Happened. But in regards to Sanders, it seems that Clinton has become more open, but not necessarily more thoughtful.