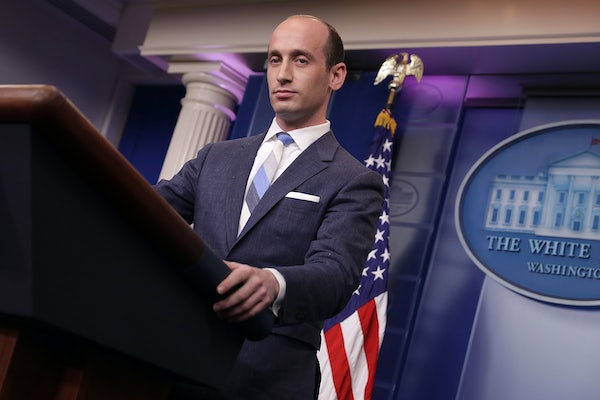 The Trump administration’s immigration policy is racist, part one million.

Since he took office, Trump has been pushing hard to curb the number of refugees accepted into the country. Last week it was reported that Trump is considering lowering the yearly refugee quota to 50,000, the lowest number since 1980. This push is being led by Stephen Miller, the White House’s most vociferous anti-immigrant advocate. In March, Trump issued a presidential memorandum that called for multiple departments to issue a report within 180 days “detailing the estimated long-term costs of the United States Refugee Admissions Program.” In June, Reuters reported that Miller was working to massage the report so that it would come out in favor of restrictive policies. “It’s a policy outcome in search of a rationale,” a former U.S. official told Reuters.

The administration denied these claims. Michael Short, a White House spokesman, told Reuters, “The idea that we are ordering biased reports is false.” But on Monday night, The New York Times obtained a draft report by the Department of Health and Human Services that stated: “Overall, this report estimated that the net fiscal impact of refugees was positive over the 10-year period, at $63 billion.” According to the Times, this report never made it to the White House and the final immigration report submitted on September 5 made no mention of these findings.

The Trump administration clearly has very little regard for facts. That it would squirrel away data that contradicted its agenda is surprising to no one. This is because the administration’s policies are fueled by racism, not data.