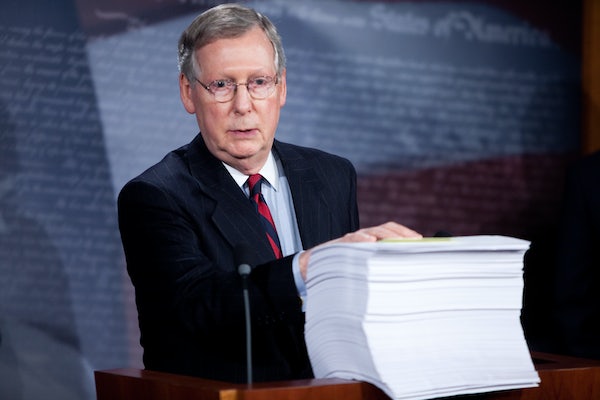 Republicans don’t know and don’t care what they’re about to do to the health care system.

They are gearing up for their third stab at repealing Obamacare, which they will have to do by September 30 if they want to pass a bill through reconciliation, which requires only a simple majority. Like every other repeal bill that has been considered, the Graham-Cassidy bill makes absolutely no sense if you care about bringing down the cost of health care, getting more people insured, or human beings in general. The legislation would eliminate Obamacare subsidies, while the Medicaid expansion would expire. Millions of people would undoubtedly lose their insurance, and people with pre-existing conditions would be left out in the cold.

On Wednesday, Jeff Stein, a reporter at Vox, went with the tried-and-true strategy of simply asking these ghouls in the Senate what the Graham-Cassidy bill does and how it will make the lives of Americans (i.e. their constituents) better. None of them could deliver even close to a coherent answer, probably because there isn’t one. Jim Inhofe told Stein the bill represented a “philosophical difference.” John Kennedy said, “Read the bill and you’ll understand.” Many of them expounded on the vague notion of states rights, without explaining how cutting federal funding to states would help people get better and cheaper health insurance.

Pat Roberts gave an answer that is genuinely concerning:

There is nothing of policy substance here because there is nothing of policy substance in the Graham-Cassidy bill, or any of the previous repeal bills. The Republican health care effort is solely driven by the desire to pass anything, even if it means destroying the lives of millions of Americans. The GOP would vote for this bill even if it was just a napkin with the words “Obamacare bad” scrawled on it.