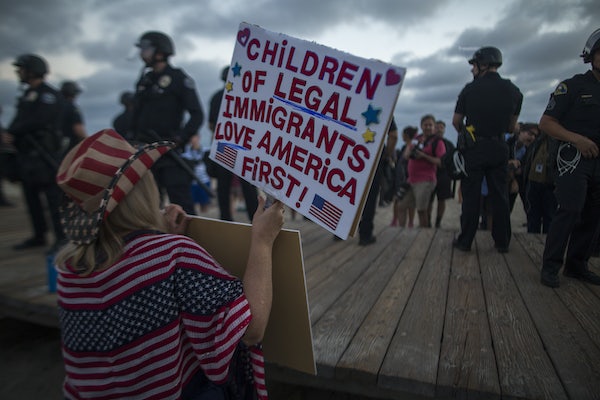 The New York Times columnist has penned an unusually smart article identifying the late paleoconservative writer Samuel T. Francis as a prophet of Trumpism. This is a point others have made before, but Brooks is doing a public service by making Francis’s historical importance known to a wider audience. The only problem is that Brooks presents a distorted picture, portraying Francis as primarily a populist blemished by racism. According to Brooks, “Francis’ thought was infected by the same cancer that may destroy Trumpism. Francis was a racist. His friends and allies counseled him not to express his racist views openly, but people like that always go there, sooner or later.” Presented in this way, as an “infection” or “cancer,” racism seems like an external malady to an otherwise healthy body.

But racism was absolutely central to Francis, just as it is a cornerstone of right-wing populism in general, where it’s used as the glue to hold white people together. That’s the chief way it is distinguished from left-wing populism, which is organized along class, rather than racial, lines.

The fraudulence of Francis’s populism is apparent in Brooks’s praise of the writer’s “insight” that “politics was no longer about left versus right. Instead, a series of smaller conflicts—religious versus secular, nationalist versus globalist, white versus nonwhite—were all merging into a larger polarity, ruling class versus Middle America.” If we group these binaries into their respective camps, what we get is a secular, globalist, non-white ruling class versus a religious, nationalist, white Middle America. But the American ruling class is neither secular nor non-white. These nonsensical categories only make sense to the degree that Francis’s populism was directed at mobilizing whites against non-whites, not at the ruling class.

In his columns, Francis returned to the need for a race-based politics time and again. He openly admired early-twentieth-century race theorists like Lothrop Stoddard and thought that David Duke offered a model for right-wing politics worth emulating. Brooks quotes Francis as having once said: “The civilization that we as whites created in Europe and America could not have developed apart from the genetic endowments of the creating people, nor is there any reason to believe that the civilization can be successfully transmitted to a different people.” Despite quoting this, Brooks fails to ask how this racism was connected to Francis’s populism. Instead, he cordons off Francis’s racism as a discrete problem untied to his broader politics.

Brooks’s blindness on the centrality of racism in right-wing populism is surely due to his residual loyalty to the Republican Party. From Brooks’s point of view, it’s bad enough that the GOP is becoming populist but unthinkable that racism will be the core of that populism. The title of his column is “The Coming War on Business.” The real title should be: “The Coming War on People of Color.”