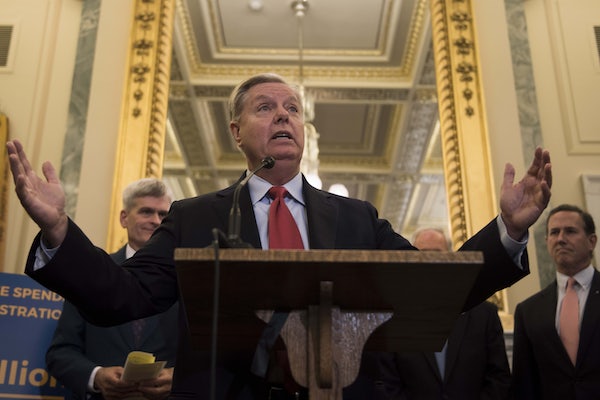 The revised Graham-Cassidy bill is a fraud.

On Sunday night, Lindsey Graham and Bill Cassidy began circulating a revised version of their Obamacare repeal bill, as well as an accompanying analysis of its effects. The revision is aimed at wooing holdout senators, and the top-line numbers for their states look enticing: Alaska, Arizona, Maine, and Kentucky would get an increase of federal funding of 3 percent, 14 percent, 43 percent, and 4 percent, respectively. Alaska’s Lisa Murkowski hasn’t declared how she will vote yet, while Maine’s Susan Collins leans no and Kentucky’s Rand Paul and Arizona’s John McCain have already said they would vote against the bill. (Republicans can only lose two votes.) On Sunday, Donald Trump tweeted the following:

However, according to independent experts, the revised bill misleads in order to get to these numbers. First off, the state-by-state analysis released by the bill’s authors doesn’t include cuts that would result from instituting a per-capita cap in Medicaid. This means that some $120 billion in cuts over 10 years is not being counted. And then there is the fact that the analysis only counts federal funding when looking at the current law, while under the new law it includes “state savings” that would come from reducing the amount states have to pay into Medicaid. Topher Spiro, health analyst at the Center for American Progress, says this is like comparing “apples to oranges.”

“It’s quite obvious what they’re doing,” Spiro told the New Republic. “They released the numbers late at night, they get a few tweets from reporters on top-line findings which are inaccurate. They even got a press story or two that just repeated verbatim their top-line findings. They’re counting on there not being enough time for news outlets to ask questions and for independent experts to analyze it and release independent estimates.” Even the authors’ own analysis shows that federal funding for Alaska drops almost $100 million, before they include the “state savings,” an amount that Spiro maintains might still be an underestimate.