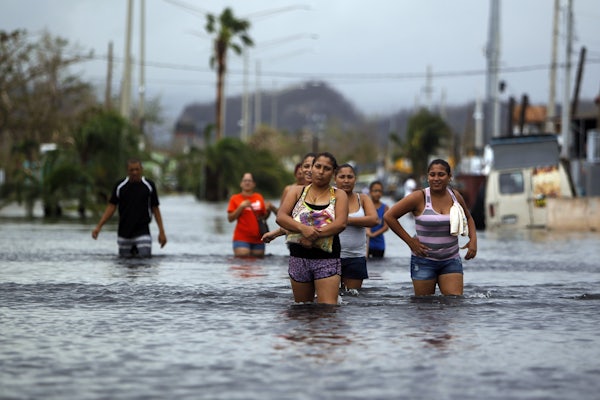 Trump has tweeted about the national anthem eight times more than Puerto Rico.

There’s a humanitarian crisis unfolding in the U.S. territory, which is home to more than 3.4 million citizens. Hurricane Maria knocked out power on the entire island, meaning residents on the hot and humid island have limited access to clean water and air conditioning. The storm’s winds, which reached 137 m.p.h., destroyed thousands of homes and much of the nation’s agriculture. “There will be no food in Puerto Rico,” one farmer told The New York Times. Children are overheating in the tropical climate as they attempt to evacuate. And some fear more damage is to come, as a cracked dam is threatening to release 11 billion gallons of water into the paths of 70,000 people.

Here’s how many times the President of the United States has tweeted about it.

Meanwhile, Trump has tweeted (or re-tweeted) 17 times since Saturday about athletes exercising their constitutional right to protest racial discrimination by not standing for the national anthem. Here’s just a sampling:

In addition to Trump’s gross misplacement of priorities, there’s some unsettling irony here. As he comes out forcefully against people who protest mistreatment of non-white people, he’s refusing to speak forcefully about a crisis unfolding on an island of mostly non-white people. Such racial injustice is exactly why NFL players are kneeling in the first place. And after Trump’s ignorance of Puerto Ricans’ plight, we shouldn’t be surprised if boricuas start kneeling, too.