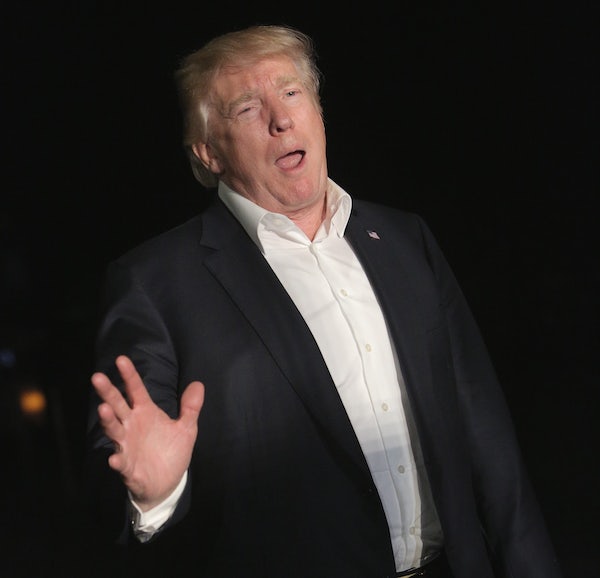 According to Axios, the president and his staff are spreading the story that he is a “crazy guy,” as a way to browbeat North Korea and other nations in negotiations. Trump’s tweets this weekend undermining Secretary of State Rex Tillerson were apparently part of this strategy.

This is, of course, just a cheap knock-off of the madman theory that Richard Nixon applied when he assumed the presidency in 1969. Nixon encouraged Secretary of State Henry Kissinger and White House Chief of Staff Bob Haldeman to warn other nations that the president was so unhinged he could use nuclear weapons. “I want the North Vietnamese to believe that I’ve reached the point that I might do anything to stop the war,” Nixon told Haldeman. “We’ll just slip the word to them that ‘For God’s sake, you know Nixon is obsessed about Communism. We can’t restrain him when he’s angry—and he has his hand on the nuclear button.’”

Nixon’s madman theory was a complete flop. The North Vietnamese saw through the bluster, and correctly figured out that Nixon was not going to risk World War III by using nuclear weapons. Trump’s “crazy guy” theory is even less likely to work because North Korea (unlike Vietnam) is a nuclear power. For Trump’s threat to be credible, we would have to assume that he is willing to sacrifice millions of South Koreans, Japanese, and Americans. Trump, while undeniably erratic and unstable, has shown no indication of being so divorced from reality that launching a preemptive nuclear war would make sense.

Moreover, the White House isn’t even playing its part correctly. By leaking to Axios, Trump’s staff has extinguished any hope that this harebrained theory might work; the North Korean government is fully capable of reading Axios and figuring out that Trump is bluffing. Thus, the “crazy guy” strategy will only reinforce the fecklessness and irresponsibility of America’s leadership, without providing any leverage in negotiations. That’s the truly crazy thing.