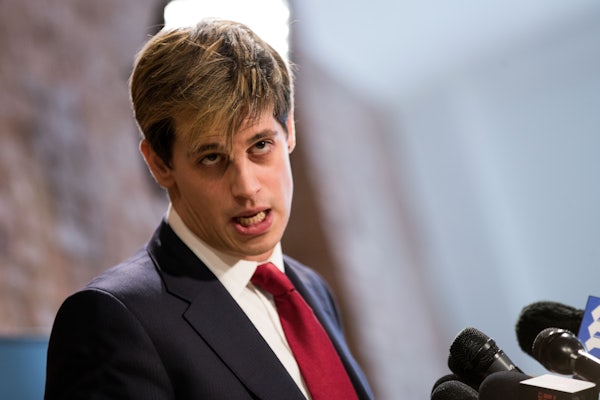 It shouldn’t surprise anyone that Breitbart had help from mainstream media.

The password for Milo Yiannopolous’s email is, or at least was, LongKnives1290. Another password for another one of Yiannopolous’ online accounts began with the word “Kristall,” as in Kristallnacht. He once sang “America to the Beautiful” to a room full of people giving Nazi salutes, with the now-notorious white supremacist Richard Spencer in attendance.

So reports Joe Bernstein in a stunning investigative piece for Buzzfeed. Documents obtained by Bernstein reveal that while Yiannopolous publicly disavowed the alt-right, he and his colleagues at Breitbart News worked steadily in concert with a wide array of alt-right propagandists to represent their views on their website. And a number of mainstream journalists helped them do it. From Bernstein’s report:

A long-running email group devoted to mocking stories about the social justice internet included, predictably, Yiannopoulos’s friend Ann Coulter, but also Mitchell Sunderland, a senior staff writer at Broadly, Vice’s women’s channel. According to its “About” page, Broadly “is devoted to representing the multiplicity of women’s experiences. … we provide a sustained focus on the issues that matter most to women.”

“Please mock this fat feminist,” Sunderland wrote to Yiannopoulos in May 2016, along with a link to an article by the New York Times columnist Lindy West, who frequently writes about fat acceptance. And while Sunderland was Broadly’s managing editor, he sent a Broadly video about the Satanic Temple and abortion rights to Tim Gionet with instructions to “do whatever with this on Breitbart. It’s insane.” The next day, Breitbart published an article titled “‘Satanic Temple’ Joins Planned Parenthood in Pro-Abortion Crusade.”

Reporters Dan Lyons and David Auerbach also allegedly suggested stories to Yiannopolous and Breitbart’s Allum Bohari; on Twitter, Auerbach claimed, unconvincingly, that he did not send the emails Bernstein included in his piece.

Meanwhile, his pal publicly degraded women, trans people, and people of color, over and over again. In light of Yiannopolous’ tireless cultivation of his bigot-for-hire brand, there are just two ways a person can be friends with someone like him:  You either share his views; or you don’t think about politics in terms of meaning or conviction. If the latter’s true, you’re a useful idiot to Yiannopolous and the alt-right— and a bad journalist into the bargain. And a horse-race-fueled vision of politics as just a game certainly makes you more likely to believe that when figures like Yiannopolous or Mike Cernovich disavow the alt-right, they mean it, and aren’t acting out of self-interest:

(See also, in this same connection, the handiwork of The New York Times’ designated alibi-generator for the right, Bari Weiss, as she seeks to defend the demagnetized moral compass of Patriot Prayer organizer Joey Gibson, who maintains ties to alt-right figures like Kyle Chapman while professing to decry the movement that counts Chapman among it most enthusiastic apostles.)

The simple fact is that Cernovich is a bigot, and Yiannopolous is a bigot, and Breitbart News has always been a bigoted website. They can reject the alt-right label all they want; their politics are no less malicious for the disavowal. But as the Buzzfeed scoop reminds us, the main reason they’ve been able to get away with this cynical bait-and-switch maneuver for so long is that too many journalists just don’t care.