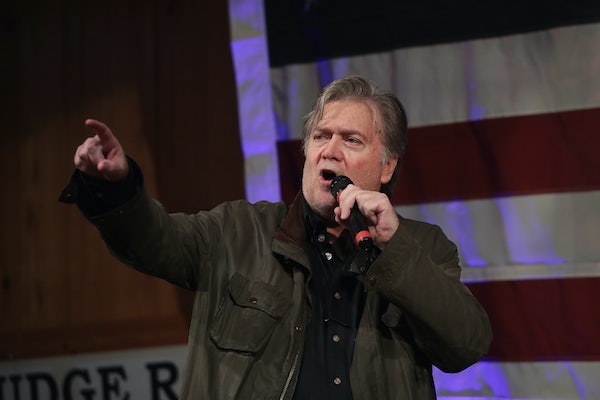 Steve Bannon is about to plunge the Republican Party into civil war.

For many years before Donald Trump ever ran for president, there was talk, some of it overblown, about a civil war within the GOP—the coming conflict between the party’s more moderate establishment and its increasingly conservative right wing, which would redefine what it meant to be a Republican. This talk grew louder during last year’s primary, but in the end Republicans mostly rallied around Trump, unable to hold their noses and vote for Hillary Clinton. Once he won, the GOP closed ranks around him in a remarkable way. Most Republicans still approve of his performance to this day, though that number has been dropping lately.

Now, the long-heralded Republican civil war may have finally arrived. Bloomberg Politics reported on Monday that white nationalist Steve Bannon, Trump’s former chief strategist, is planning to back primary challenges to nearly every GOP senator seeking re-election next year: “He’ll support only candidates who agree to two conditions: They will vote against [Mitch] McConnell as majority leader, and they will vote to end senators’ ability to block legislation by filibustering.”

Conspicuously absent from the list of senators in Bannon’s crosshairs is Ted Cruz. Longtime viewers of our national political reality show will recall that Cruz was once Trump’s nemesis—the man he dubbed “Lyin’ Ted,” who stood up last summer at the Republican National Convention and urged the GOP rank-and-file to “vote your conscience” in November. Now, Cruz is the only senator being spared a primary in 2018, Bloomberg reported, because he’s “considered conservative enough and is thought to be moving toward the more populist approach Bannon favors.”

Cruz’s Republican colleagues facing reelection next year will be up against what Breitbart is calling “The League of Extraordinary Candidates.” What’s truly extraordinary is how the Republican Party is taking up arms against itself not even a year after it won full control of the government.