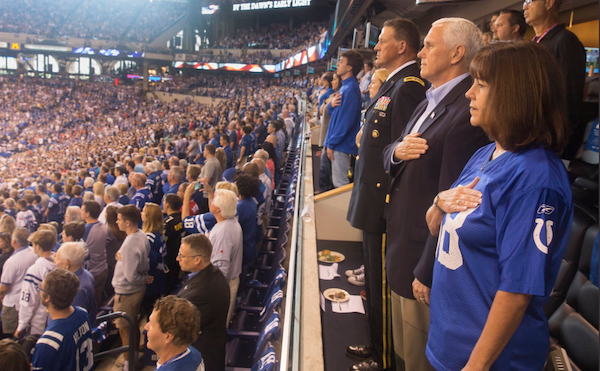 ESPN got played by Donald Trump.

On Sunday, Vice President Mike Pence and his wife walked out of an Indianapolis Colts-San Francisco 49ers game after several players kneeled during the national anthem. It quickly became clear that this was a publicity stunt meant to revive the issue of anthem protests, which had once again begun to fade out of the news. Pence had another engagement that evening and had a plane to catch; his traveling press pool was told to stay in the van. The whole debacle got the desired media coverage and likely cost $250,000 of public money.

Also on Sunday, Jemele Hill, a black anchor who has become the center of a largely meaningless and entirely disingenuous debate about whether or not ESPN should stick to sports, sent two tweets about a potential boycott of the Dallas Cowboys, whose owner Jerry Jones said he would bench players who protested during the anthem.

A day later, Hill clarified that she wasn’t endorsing boycotts, just noting that they’re an effective way for people to make their voice heard. But three hours after that clarification, ESPN announced that Hill was being suspended for two weeks “for a second violation of social media guidelines.” (The first was when Hill referred to the president as a white supremacist, citing his abhorrent response to the white supremacist rally in Charlottesville, Virginia.)

Trump, who praised Pence’s fake walkout on Sunday shortly after it happened, pounced on Tuesday morning:

Hill’s suspension is especially ridiculous given that all she did was point out that fans are able to exert influence over the teams they cover. Trump called for a boycott of the NFL; Hill did not. But ESPN has nevertheless caved (again) to right-wingers, suspending Hill in order to try to prove something that no one involved in this debate actually believes, which is that sports and politics are entirely separate. In doing so, they’ve handed a victory to Trump, essentially validating an argument that was never made in good faith to begin with.