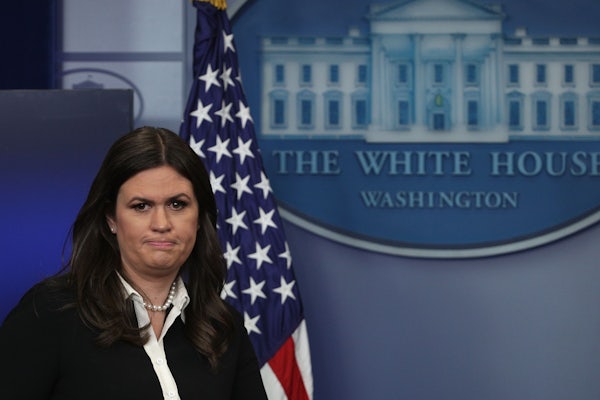 Pity Sarah Huckabee Sanders, who is just the press secretary for the president of the United States. She belongs to a beleaguered minority—she is a conservative Protestant, truly a rarity in the United States—and people make fun of her father, who believes totally normal things about gay people and abortion, why do you ask... Really, just feel bad for her, even though she’s in power. That’s the gist of her comments to The Washington Post’s Michelle Boorstein, published on Wednesday:

In the years after, she saw conservative Christians — like her family, like most everyone she knew — ridiculed in American pop culture.

“If someone says something about another faith, particularly liberals come to their defense in a raging motion, but if someone attacks a Christian, it’s perfectly fine. At some point we became a culture that said that was okay,” she further complained to Boorstein.

That will be news to leftist professors like George Ciccariello Maher and Keeanga-Yamahtta Taylor, who’ve suffered violent threats and professional setbacks thanks to right-wing intimidation campaigns. See also: Muslims, LGBT people, and really anyone else who falls short of the narrow standards of patriotism and probity espoused by conservative evangelicals.

There’s no statistical evidence, either, that evangelicals really inhabit society’s margins. According to the Pew Research Center’s Religious Landscape Study, fully 70 percent of Americans identify as Christian; of that sizable majority, 25 percent say they belong to an evangelical tradition. The Alliance Defending Freedom—one of the religious right’s key legal powerhouses—boasted revenues of $48 million in 2016. The ACLU dwarfs it, which probably keeps ADF staff awake in the small hours of the morning, but still: $48 million dollars is a lot of money, testament to a robust  grassroots network of popular support.

But none of this matters. None of it needs to matter. Sanders herself probably knows it too. American evangelicalism’s martyr complex is part of its appeal: People love to pretend that criticism is persecution, and Republicans manipulate this tendency because it gets voters to the polls. That, indeed, is the only reason I have to type out the name “Sarah Huckabee Sanders” in the year of our Lord 2017. The Huckabees are America’s preeminent family of dog-murderers because conservative evangelicals are more influential than they deserve to be. Sanders’s pity party would insult the intellect even if she hadn’t voluntarily agreed to speak for an idiot bigot who could lead us into nuclear war. But she did. So take your victim shtick elsewhere, Sarah. The pity you court is a far cry from Christian compassion.