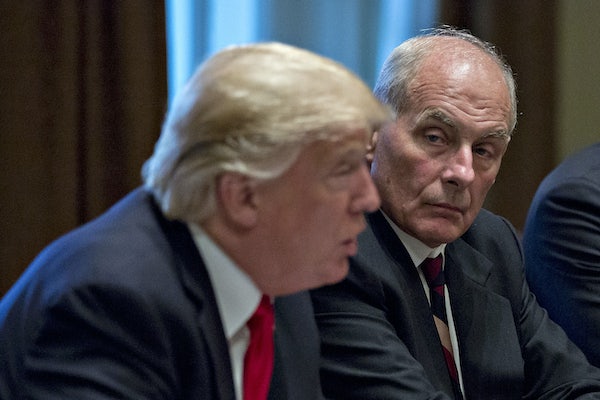 If John Kelly is supposed to be a check on Trump’s worst impulses it’s not working.

When Kelly replaced Reince Priebus as chief of staff, the move was widely greeted as a step forward for the administration. Priebus was widely perceived as having no control over the president’s outbursts, while Kelly was an “adult” and the more adults in the room the better. “Kelly has a reputation for efficient management of complex organizations, and is a no-nonsense guy who can make the trains run on time,” wrote Axios’s Mike Allen at the time. Kelly’s job was to keep the president disciplined, minimize distractions, and get things done—three things his predecessor could not do.

Well, three months later, this is what it looks like when the trains run on time. There’s no better example of Kelly’s impact—or lack thereof—than the way the administration has responded to Donald Trump’s outrageous claim that his predecessors did not contact the families of soldiers killed in the line of duty. “If you look at President Obama and other presidents, most of them didn’t make calls,” Trump said at a press conference on Monday, while defending his decision to not make a statement about four Green Berets who were killed in an ambush in Niger two weeks ago. “A lot of them didn’t make calls. I like to call when it’s appropriate.”

It’s an ignorant, bombastic, self-serving, and easily disprovable claim, the latest in a long line of similar statements. That the White House responded by digging in and dragging Kelly into this mess is indicative of Kelly’s entire term as chief of staff.

Trump doubled down on Tuesday. In a call to Fox & Friends, he said, “I mean, you could ask General Kelly did he get a call from Obama. You could ask other people. I don’t know what Obama’s policy was. I write letters, and I also call.” Kelly’s son Robert was killed in Iraq, and later on Tuesday a “White House official” told news outlets that Kelly didn’t receive a call from Obama after his son was killed. (BuzzFeed’s Steven Perlberg reports that the White House official, who should never have been granted anonymity, was Sarah Huckabee Sanders.) Later reporting revealed that Kelly and his wife sat next to Michelle Obama at a breakfast honoring Gold Star families.

This is grotesque for a number of reasons. Eulogizing two other Marines who had been killed days after his son’s death, Kelly asked that his son not be singled out for special memorialization. He has largely refrained from discussing him publicly in the seven years since he died. That his son was invoked by both Trump and Sanders, solely  to prop up an obviously spurious and pointlessly political claim, is sickening. It’s worth underscoring: The Trump administration is using its chief of staff’s dead son to give a patina of credence to an obvious lie.

It’s also a reminder of the limits of the “adults in the room” theory of the Trump presidency, the idea that disciplined (often military) people can control the president. That hasn’t happened. Kelly can’t even protect the memory of his own son from this administration.