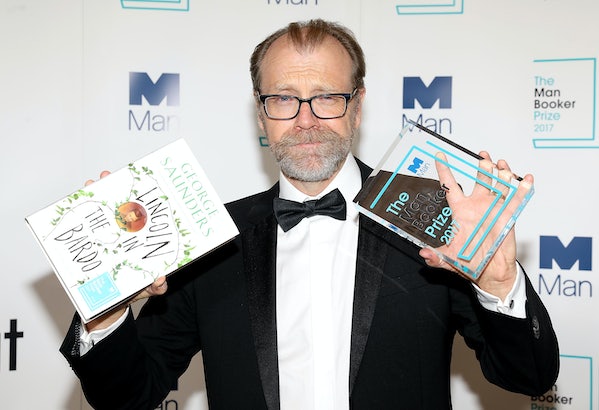 Saunders became the second American—and the second American in a row—to win the Man Booker on Tuesday. He was honored for Lincoln in the Bardo, his first novel after a long career writing short fiction. Written almost entirely in dialogue, this semi-historical novel is about President Lincoln grieving for his son Willie, who died during the first year of the Civil War. Though something of a departure from Saunders’s gentle dystopias, Lincoln in the Bardo nevertheless explores familiar themes—the meaning of freedom and the finality (or lack thereof) of death—and further cements his status as Vonnegut’s heir.

Lincoln in the Bardo was praised as “utterly original ... witty, intelligent, and deeply moving” by Baroness Lola Young, who chaired the judging panel. In his acceptance speech, Saunders, who memorably wrote about Donald Trump’s presidential campaign for The New Yorker in the summer of 2016, addressed the political situation in the United States:

“We live in a strange time. The question at the heart of the matter is pretty simple. Do we respond to fear with exclusion and negative projection and violence? Or do we take that ancient giant leap of faith and do our best to respond with love? And with faith in the idea that what we see as other is actually not other at all, but just us, on a different day.

In the US now we’re hearing a lot about the need to protect culture. Well, this tonight is culture—it’s international culture, it’s compassionate culture, it’s activist culture. It’s a room full of believers through the word, in ambiguity and beauty and trying to see the other person’s point of view, even when it’s hard.”

The fact that another American has won the Man Booker is notable, an inevitable result of the prize’s newly minted global status. Once distinctly British, the Man Booker is now essentially a prize for the best English language novel published in a given year. Opening the prize to Americans, which it did in 2014, has made the Man Booker bigger, but not necessarily better.