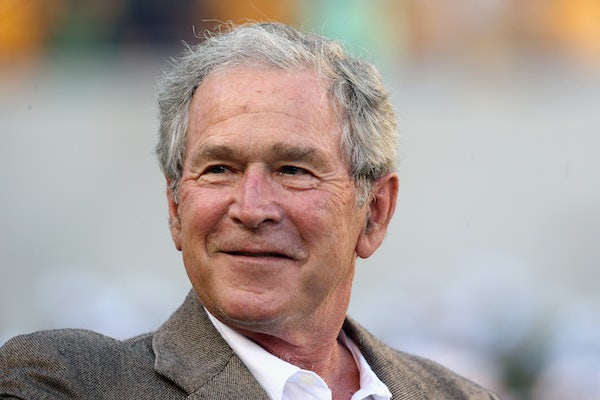 On Tuesday, the Arizona senator delivered a speech condemning “spurious nationalism,” which was widely seen—including by the president himself—as an attack on Trump’s ethno-nationalist appeals and America First foreign policy. Now Bush, speaking at the George W. Bush Institute on Thursday, has echoed these sentiments.

“At times it could seem like the forces pulling us apart are stronger than the forces binding us together,” the former president said. “Too often we judge other groups by their worst examples, while judging ourselves by our best intentions, forgetting the image of God we should see in each other. We’ve seen nationalism distorted into nativism, forgotten the dynamism that immigration has always brought to America. We see a fading confidence in the value of free markets and international trade, forgetting that conflict, poverty and instability follow in the wake of protectionism. We see the return of isolationist sentiments, forgetting that American security is directly threatened by the chaos and despair of distant places, where threats such as terrorism, infectious disease, criminal gangs, and drug trafficking tend to emerge. In all these ways, we need to recall and recover our own identity.”

Because these remarks are a covert swipe at Trump, they will get much attention and praise. But they shouldn’t serve to exonerate the 43rd president. Like McCain, Bush needs to reflect on how his own politics laid the groundwork for Trump’s presidency. Bush, after all, was the president who pulled out of the Kyoto Protocol and other international agreements while sidelining the United Nations in the rush to war with Iraq. Bush was also a precursor to Trump in the domestic sphere, framing himself as a proud anti-intellectual who disdained government. As bad as Trump is, Bush actually did far more damage, not least by helping make Trump himself possible.