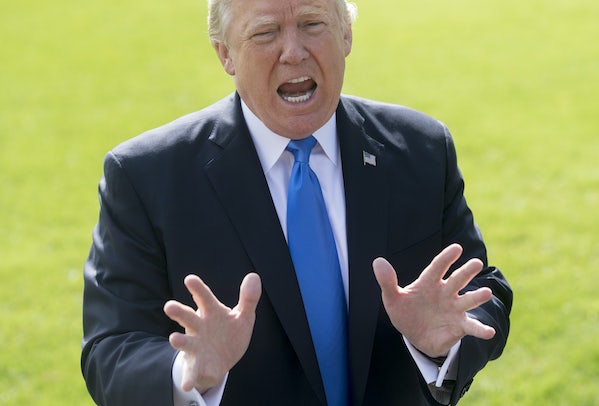 Don’t expect Trump to do anything meaningful about the opioid crisis.

Donald Trump, Ivy League brain genius, has staked quite a bit of his populist reputation on his supposed concerns about an epidemic of overdose deaths. He promised to declare the crisis a “national emergency,” a dramatic move that would have opened up federal resources to tackle the problem. But on Thursday, the president declared it a “public health emergency” instead.

This refusal to follow through on his campaign promise was foreshadowed by former Health and Human Services Secretary Tom Price. “We believe that, as this point, that the resources that we need, or the focus that we need to bring to bear to the opioid crisis at this point can be addressed without the declaration of an emergency, although all things are on the table for the president,” he said in August. And though Price is gone, Trump is still reluctant to address the crisis with the urgency he displayed on the campaign. As The Guardian reported on Thursday morning, he still won’t release any public funding:

A senior White House official said the crisis is an “urgent priority for the president” and that the declaration under the health service act will help the administration direct additional resources toward some of the worst hit areas, such as expanded access to telemedicine in rural areas of Appalachia where medical resources are limited. It will also allow the administration to appoint specialists and address doctor shortages, as well as direct some money used to treat HIV/AIDS toward people within that program who are also addicted to opioids.

Without an influx of public funding these efforts will fall short of what’s necessary. But we know the routine that will follow. Republicans will praise him. Certain pundits will breathlessly opine that this, Thursday Oct. 26, is the day he became president. And the crisis will rage on.